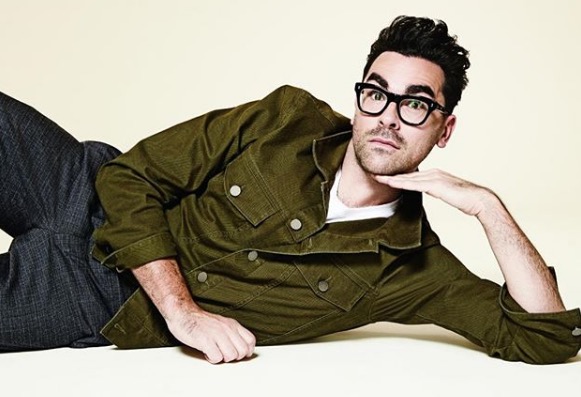 Who he is: Actor, writer, producer

Dan may have a famous father in comedic actor Eugene Levy (for our younger readers, stop what you’re doing and go watch Waiting For Guffman), but he was raised away from the Hollywood spotlight, in Toronto.

Still, he’s found his way to stardom with the wild success of his CBC comedy, Schitt’s Creek. He created and stars in the show with his dad. His sister, Sarah, is also in the cast. It’s a real family affair.

What he’s accomplished: The show first aired in 2015 and has picked up a massive following in its five seasons, thanks in no small part to Catherine O’Hara’s star run as “Moira”, the Rose family matriarch. And her wigs; so many wigs.

Audiences first assumed Levy’s character, “David”, to be gay. He later has a romantic connection with a female character, providing one of the few “pansexual coming out scenes” in TV history. And certainly the only one with a wine analogy:

“I do drink red wine, but I also drink white wine, and I’ve been known to sample the occasional rosé, and a couple summers back I tried a Merlot that used to be a Chardonnay,” David explains. “I like the wine and not the label.”

The sixth and final season of Schitt’s Creek will air next year and eventually be available on Netflix.

Why we’re proud: From the get-go, Levy’s take on queer representation in Schitt’s Creek was forward-thinking.

Similarly, he consciously ignores homophobia as a plot vehicle.

“I have no patience for homophobia,” he explained at Vulture Festival last year. “As a result, it’s been amazing to take that into the show. We show love and tolerance. If you put something like that out of the equation, you’re saying that doesn’t exist and shouldn’t exist.”

And despite being a screwball fish out of water comedy, the show has handled its more earnest endeavors with the utmost class.

A particularly emotional moment came in a season four episode in which David’s boyfriend, “Patrick”, serenades him with an acoustic cover of Tina Turner’s “Simply the Best.”

“As a gay person to tell these stories and to have no questions asked and no notes from network and to feel completely uninhibited in saying, ‘This is a gay couple on TV; they’re going to kiss like any straight couple would’ — it’s amazing. Gay relationships have historically not been treated the same as straight relationships,” Levy told The Star.

“You don’t see the same kind of sexuality, intimacy, kissing, because it’s been considered taboo or headline-grabbing for so long. I love that we’ve been able to just tell a relationship as it is, as it exists, for me, for my friends, for people I know, for people out in the world, that doesn’t come with a lesson to be learned. It’s just two people loving each other.”