The Requisite: Tales of the City

The wait finally ends this Friday, June 7, when the much-anticipated fourth entry in the Tales of the City franchise comes to Netflix. Few shows have ever celebrated the diverse tapestry that is the LGBTQ community with such love or tenderness. The new series finds transgender pothead landlady Anna Madrigal (once again played by the great Olympia Dukakis) celebrating her 90 birthday and bringing together several generations of her adoptive queer children. Yet a dark secret from her past begins to haunt her and threatens the existence of the refuge she’s created at 28 Barbary lane. We’ve seen the full 10-episode run and can say the new series manages to bring modern diversity to a classic tale.  It’s a must-see, and a great way to celebrate Pride Month.

The buddy comedy which delighted audiences at the Toronto Film Festival finally gets a theatrical run in here in the states. Matt Bomer stars as Sean, a weatherman on the verge of a total breakdown. When his boss forces him to take some “vacation” time from work, Sean hires migrant worker Ernesto (Alejandro Patino) to repaint his deck. The two thus begin an unlikely friendship. John Butler (Handsome Devil) writes and directs with his usual charm and wit, as well as with genuine empathy. Moreover, Papi Chulo features Bomer in possibly his best–and funniest–performance to date. Wendi McLendon-Covey of Reno 911! and Bridesmaids also plays a supporting role, as does Bomer’s bare ass. In short, it’s worth the price of admission.

Speaking of waits coming to a merciful end, Pose returns this week for a new season of voguing and fabulousity. We’ve visited the set of the new season to meet with executive producer Ryan Murphy and the cast, and to tour the sets (more on that forthcoming), and we’ve seen the first four episodes. Though we’re sworn to secrecy, we can say that the new season jumps three years ahead of the last, and finds Blanca (MJ Rodriguez) and Pray Tell (Billy Porter) struggling with HIV, and the house of Evangelista celebrating the release of Madonna’s drag ball inspired “Vogue.” Tempers flare, drama brews and tragedy strikes in a season just as captivating as the first.

Just in case you’ve not seen the three original Tales of the City miniseries, we’ve scoured the internet trying to find them on some streaming site. Thank goodness then, for AcornTV which now offers all three full series for streaming pleasure. As with the newest incarnation, each iteration of Tales adapts the work of Armistead Maupin for the big screen, centering on the fictional apartment house at 28 Barbary Lane in San Francisco. The original series, produced by PBS, remains the gold standard, not just for queer representation, but for miniseries as an art form. The two sequels produced by Showtime also retain most of the same cast and most of the same fun. Though the new Netflix Tales stands on its own, the stories and characters will have far more resonance for viewers familiar with the originals which feature Laura Linney, Barbara Garrick, Olympia Dukakis, Chloe Webb, Donald Moffat, Parker Posey, Ed Asner, Sandra Oh and Ian McKellen all have featured roles. A celebration of love and the LGBTQ community, these versions of Tales of the City should not be missed.

The History Lesson: The Lavender Scare

Once upon a time, a few lucky gay people could thrive in the United States, so long as they maintained a certain level of discretion. That all changed in the 1950s with the Lavender Scare, a national hysteria over the presence of gay people as a threat to the nation, looking to sell it out to the Soviet Union. The new documentary of the same name, based on David K. Johnson’s book, retells how innuendo and demagoguery caused a panic used to deny people their jobs and their livelihood. As narrated by Glenn Close, the new documentary includes interviews with actual victims of the scare, and with surviving relatives of those already gone. Infuriating and powerful, The Lavender Scare serves as a potent reminder that in spite of progress, danger always looms should a community allow itself to fall silent, or worse, invisible.

In theatres in New York and Los Angeles June 7. A national rollout in cinemas and on streaming will follow.

Malcolm Ingram, director of Small Town Gay Bar aims his camera at another small town gay bar all the way down in Biloxi, Mississippi. Southern Pride follows two owners of local gay bars as they try to organize the city’s first Pride celebration to push back against the bigotry championed by Donald Trump, and show solidarity in a hostile country. Much as with his earlier outings, Ingram finds loveable, flawed and hilarious characters to feature in his story, which makes them all the easier to root for. Southern Pride serves to remind people everywhere–queer and not alike–that pride can be found anywhere people come together as a community.

The Deep Dive: Before Homosexuals

Homophobes love to argue that LGBTQ people didn’t exist before the Kinsey studies of the 1950s (when the word “homosexual” was coined). In point of fact, we’ve been around before Adam & Eve, when Adam loved Steve, so why does history seem to forget us so easily? Filmmaker John Scagliotti conducts worldwide research with historians and anthropologists to uncover the history of queer people in various cultures on a global scale, spanning from the 20th century all the way into prehistory. Before Homosexuals uncovers everything from lesbian goddesses to ancient Roman cruising spots in a fascinating look at queer history, and the nefarious forces that have tried to erase it.

Available on DVD and streaming on Amazon & iTunes June 11.

The Sip: The Pride Punch 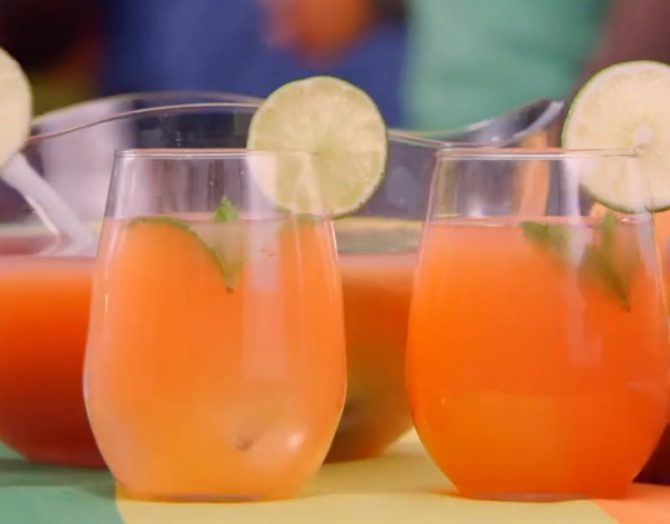 Let the taste buds celebrate Pride with this fruity, crisp cocktail designed to make everyone want to giggle and sing along to their favorite gay anthem.

Mix vodka, juice and soda in a glass over ice. Add a slice of lime for flavor and garnish.