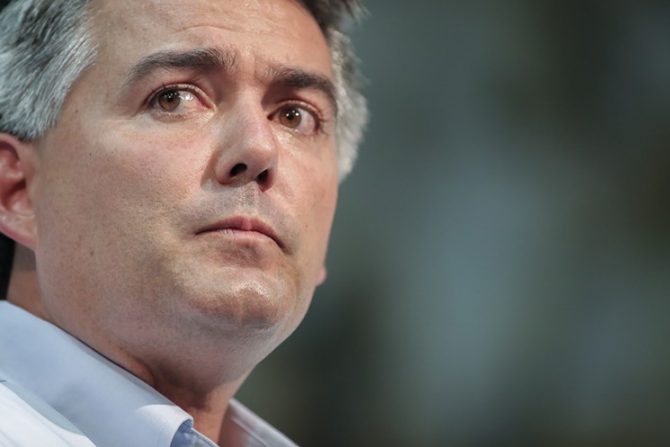 Republican Sen. Cory Gardner of Colorado is up for reelection in 2020 and Dan Baer, an openly gay Democrat and former U.S. Ambassador under President Barack Obama, hopes to unseat him.

Baer, who just received the endorsement of the LGBTQ Victory Fund, pulled in a jaw-dropping $1.35 million in fundraising dollars last quarter. It’s the largest ever initial fundraising total for an openly LGBTQ congressional candidate.

Proud to have the endorsement of a group that backs an incredible slate of highly qualified progressive leaders and public servants dedicated to bringing substantive change and empathy back to our politics. Thanks @VictoryFund! pic.twitter.com/DTCOBC1nxC

This no doubt has Gardner more than a little unnerved.

44-year-old Gardner has a long history of supporting antigay policies. Not only does he oppose same-sex marriage, but in 2015, he voted against giving same-sex partners access to the Social Security and veterans benefits earned by their spouses, and in 2007, he voted against a bill to allow same-sex couples in Colorado to adopt children.

In addition to that, Gardner has voted to confirm nearly all of Trump’s judicial picks, even the ones with vehemently anti-LGBTQ records, and he declined to co-sponsor any pro-LGBTQ bills, like the Equality Act.

He currently scores 12 on the HRC’s Congressional Scorecard, down from 16 the previous year. In contrast, he has a perfect score of 100 percent with the antigay hate group The Family Research Council.

Despite all this, Gardner still likes to bill himself as a “pro-LGBTQ Republican” by appearing at fundraisers hosted by the conservative LGBTQ rights group American Unity Fund and having his press secretary tell reporters he’s “a strong supporter of marriage equality” while he simultaneously tells the same reporter that “marriage should only be between a man and a woman” and “my views on marriage have long been clear.”

Seriously, the dude’s a mess.

If elected, Baer would become the first openly gay man in the U.S. Senate and the third openly LGBTQ person to serve in the chamber.