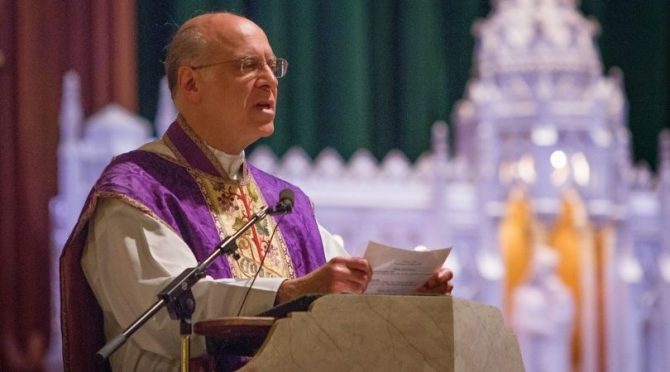 An antigay priest from Detroit accused of molesting a teenage boy in the 1970s and supplying alcohol to at least two minors has produced a letter signed by over 50 former altar boys saying he’s not a predator because he never acted inappropriately towards any of them.

Last month, the Associated Press ran a story about a former altar boy who alleged Rev. Eduard Perrone had molested him at a lake house in the late 1970s. The alleged molestation happened while the altar boy and Perrone were wrestling together in the water.

70-year-old Perrone, who once outed several of his gay colleagues in a salacious dossier he secretly sent to the Vatican, told the AP there wasn’t any “inappropriate touching” and maintained that he “never ever would have done such a thing.”

But the Archdiocesan Review Board found the allegations against Perrone credible, meaning it has a “semblance of truth.” In response, he has been removed from public ministry while the situation is investigated by the Vatican’s Congregation for the Doctrine of the Faith, which handles all cases involving sexual abuse by clergy.

Now, in an effort to clear his name, Perrone, who once helped found a nonprofit organization offering support to priests accused of sexual abuse, has rounded up 51 former altar boys to sign a letter saying he never molested them, thus proving his innocence.

“We are all altar boys who have served with Fr. Perrone at some point over the years,” the letter states, before listing all the various types of interactions they had with him, including canoe trips, overnight retreats, and one-on-one meetings, during which Perrone never made any moves on them.

“Collectively, we have spent tens of thousands of hours with Fr. Perrone in circumstances like these, among others,” the letter continues. “None of us have ever experienced, or observed, any immoral or inappropriate behavior by Fr. Perrone in connection with his interactions with altar boys or any other parishioners.”

Perrone was also accused by at least two others of serving alcohol to minors, which he initially denied and then, in the same sentence, admitted to.

“I may have had wine in their presence,” he told the AP, “but I’ve never given them a drink. In fact one time I remember being with one of our altar boys and his dad in the rectory and I said, ‘Do you want him to have a little bit of this glass of wine?’ and it wasn’t the dad, it was the kid that said, ‘No, I don’t want any of that.’”

In a church newsletter earlier this year, Perrone decried sexual abuse inside the church.

“The real shame is not the publicity of horrid, secret sins but the venting of lewd passion, the foul degradation of the flesh, the mortal sins committed,” he wrote. “Where did holiness go?”

Earlier this month, Perrone’s name was added to the website protect.aod.org, which lists priests who have faced credible allegations.