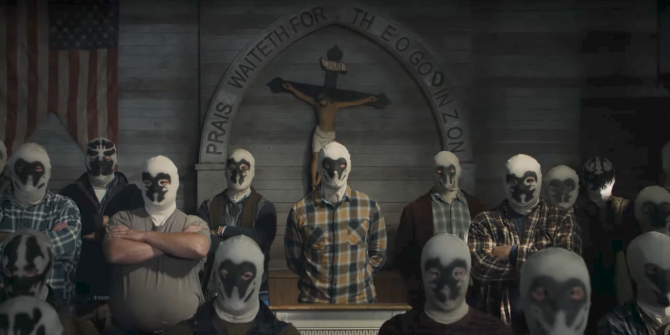 For anyone that enjoys men in tights…pay attention!

HBO stole the show at the San Diego Comic-Con this past weekend, courtesy of the first trailer for the network’s much-anticipated new series Watchmen.

For the uninitiated, Watchmen is widely considered the greatest graphic novel ever penned. Indeed, Time ranked it as one of the 100 greatest novels of the 20th century. Unlike the classic tales of DC or Marvel Comics, however, Watchmen takes a decidedly real-world approach to the characters and their psychologies. Accordingly, the story also presents an in-depth examination of the sexual identities of its subjects. That includes featuring several queer characters.

The original novel took place in 1985, and culminated with a major event that destroyed New York City. It became a film in 2009, directed by Zack Snyder, though it somewhat toned down the sexual elements of the story. The new HBO series more closely follows the original book and picks up in the present day. We therefore also hope it retains the queerness of the saga.

With a mix of characters from the novel and several original characters, the show examines the aftermath of the destruction of New York, and how the world has changed because of omnipresent costumed vigilantes. Among the cast: Adrian Veidt/Ozymandias, the smartest man alive, who also has an attraction to other men. Oscar-winner Jeremy Irons takes on the role.

Watchmen comes to HBO this October.