What to Watch: Russell Tovey in dystopia, ‘Orange’ takes a bow, and Ben Whishaw getting screwed

The Bow: Orange is the New Black

The groundbreaking, dark comedy series which helped launch the careers of Laverne Cox, Asia Kate Dillon and Samara Wiley returns for a seventh—and final—season. The new episodes find the antiheroine Piper (Taylor Schilling) struggling to adapt to life outside of prison. Meanwhile, the ladies still on the inside the slammer plot to find hope for their own lives on the outside. This season also folds in the subject of the Trump Administration’s migrant camps. Orange is the New Black has come a long way since it debuted in 2013. Fortunately, the final season retains what made the show so special to begin with: a great cast and stories of marginalized people desperate to be heard.

The Whodoneit: Who Killed Garrett Phillips

HBO launches yet another awesome documentary series, with yet another riveting hook. In 2011, neighbors reported hearing a struggle in a nearby apartment. Police found the body of 12-year-old Garrett Philips dead inside, murdered by strangulation. Investigators immediately zeroed in on Nick Hillary, a Jamaican immigrant, US Army veteran and university soccer coach who had dated Phillips’ mother. Yet the evidence against Hillary is sparse, and as a black man in a mostly white community, police seem a bit too eager to pin the blame on him. Less a mystery than an examination of small-town and systemic prejudices, Who Killed Garrett Phillips doesn’t concern itself so much with answering questions as it does spotlighting the distractions which prevent solving a crime. Even without a real catharsis, the story manages to captivate from start to finish.

The Horrifying: The Great Hack

The Cambridge Analytica scandal continues, as the world continues to reel from a deluge of fake news and triggering stories that resulted in abominations like Brexit and the Trump Administration. As directed by Karim Amer and Jehane Noujaim, The Great Hack chronicles how the data mining company hacked user information from Facebook ranging from Google searches to credit card purchases, sold it to political fringe groups like Trump, Ted Cruz and Leave.EU, forever damaging the democratic process. The film begs the question if anybody, anywhere can even hold a fair election in the wake. With a new election already in the early stages, and given the number of queer people that use social media, apps and the internet to connect, it’s a frightening omen of the future, and a must-see.

Ben Whishaw and Hugh Grant scored Emmy nominations this week for their work in this outstanding Amazon series about the sex scandal that destroyed the career of British MP Jeremy Thorpe. Grant stars as Thorpe, a rising star in the Liberal Party in Britain during the 1960s. Whishaw plays his sometime boyfriend Norman Scott, who sets about outing Thrope when the latter refuses to return his National Insurance Card (the UK equivalent of a Social Security Card). Then ensuing scandal somehow manages to be both disgusting and hilarious, courtesy of a witty script by queer writer Russel T. Davies, and the assured touch of director Stephen Frears. Both Grant and Whishaw have some stiff competition at the Emmys this year. That doesn’t diminish the work of either…or make the series any less addictive.

The Fever Pitch: Years and Years

Out-gay actor and perennial heartthrob Russell Tovey stars alongside Emma Thompson in this ensemble miniseries produced by the BBC and HBO. In essence, the series (penned by Russell T. Davies, see above) takes all the fears and anxieties of the Trump era to a new level, imagining a future of war, economic conflict and persecution of minorities—including LGBTQ people. Years and Years examines how political strife and international pressures can affect day-to-day life and relationships, and does not spare the horror. The final episode airs this week, as the chaos—both personal and international—reaches a climax. Frightening, funny and sobering, the series rewards viewers strong enough to invest in its bleakness.

Out-gay director Gus Van Sant turns 67 this week, and as such, we offer this salute to his body of work. From must-see queer classics like My Own Private Idaho, Milk and Mala Noche, to mainstream hits like Good Will Hunting and Finding Forrester, Van Sant has proven himself one of the most ambitious and talented American directors now living. Celebrate his birthday with a watch of one of his signature films or, like us, turn to some of his smaller, overlooked titles. The dark comedy To Die For features Nicole Kidman in one of her best roles as a murderous weather girl, while Elephant dramatizes the Columbine Massacre and explores the possible homoeroticism between the two killers. 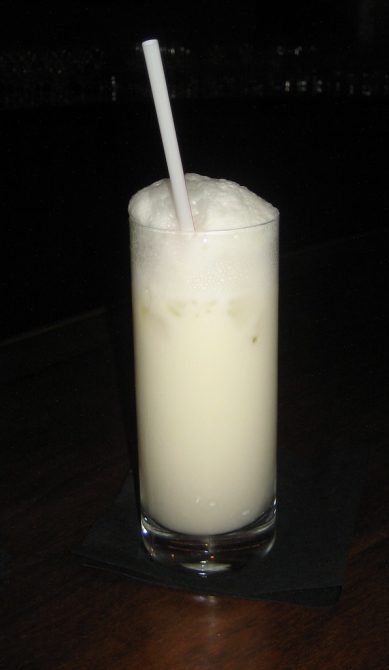 We don’t know about you, but with July in full heat (ditto us) and some heavy subject matter on this week’s list, we need a stiff one. Er, a stiff drink that is. As such, we reccommend this potent and bubbly Brit staple to sip while watching anything mentioned here.

Mix gin, juice, syrip and egg white in a shaker over ice. Shake well. Pour over ice in a tall glass. Top with club soda.