Stage star and trainer Sam Leicht, on how sports can build a bridge to queer acceptance 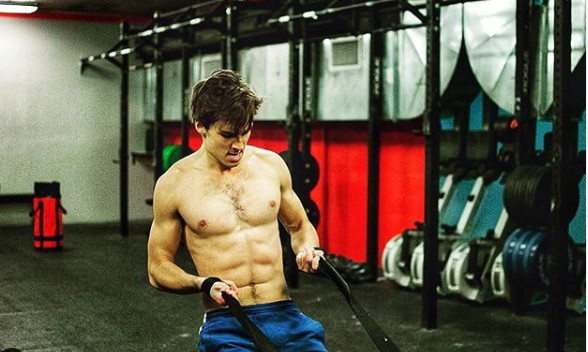 Occupation: Trainer, though I think of myself as an actor. I went to school for music theatre. [Leicht also just finished a 7-month tour of Percy Jackson and the Lightning Thief: The Musical]

Favorite Gym:  I work at CrossFit NYC on the upper west side. When I left on tour, I was nervous about having anything that at all resembled structure. That turned into dropping into as many different CrossFit gyms across the country as I could. I would drop into as many as 3-5 different gyms per week.

Related: Trainer Joemar Buyao on how the ‘Avengers’ theme can keep you gym motivated

Favorite Work Out Song: I’m definitely about the power ladies. Ariana, Demi, Gaga, Cardi…anyone who has a great beat and takes my mind off the hurt.

Recommended Work-Out Foods: With my clients, and with myself out on the road we just started doing the 800-gram challenge. With all my fitness training, I look for something sustainable. The 800-gram challenge is just eating 800 grams by weight of fruits and vegetables every day. It’s not restrictive; there’s nothing in the diet I can’t eat as long as I get 800 grams of fruit and vegetables every day.

Best Workout Outfit: If I have a preferred outfit, I wear Bird Dog shorts a lot, and a lot of Lulu tank tops.

How do you balance staying in shape and having fun? That is always the question, isn’t it? It’s a delicate balance. Whenever I’m with my best friends, I always want to have a good time, but at the same time I look at what I do in the gym, and I look at how going out affects my sleep and what I do in the day. It’s hard to reconcile the two. My last four months on the road I was sober. I didn’t choose to do it consciously, it just happened. I try and stay on the track of doing outdoor things on the track or in the city that don’t include drinking. Then, every once in awhile, I go out and have a really good time with my friends.

What about as a vocalist and stage performer? Honestly, I see my fitness and acting goals as fueling each other. When I think of staying in shape for acting, I think it stems a lot from what I do physically. That is also a delicate balance as well. There are times where I’m working out in the gym and really feel tension in my neck, and so I have to take a step back and figure out what that is going to do for me when I sing for two hours on stage. If I’m building tension in my jaw and from my neck in the gym, that doesn’t go well.

In your essay, you note the hostile attitude towards gay people in sports, and link that to a hostility towards femininity. What is that about? Is that just sexism? It’s something I think about all the time. I remember reading an article in college saying we need to reevaluate those bullies in high school who were really rough on gay kids. We need to reevaluate it because there is a double standard of women allowed to experiment with their sexuality more freely than men. With men, especially in high school, looking in the wrong direction can be death for you, or experimenting kissing a boy is the talk of the school. It’s a double standard in society we have to evaluate because it shouldn’t be that way. I understand that I could walk into a gym and people will be nervous to interact for fear that being nice will be admitting you’re gay by association. It’s so screwed up.

For that matter, what is the obsession with masculinity among gay men about? It does seem like society has really lifted up this idea of masculinity as being the absolute goal for men. In the gay community, it seems we’ve also lifted up that idea. I don’t know what that is.

You note also that you were a track star by the time you were a sophomore, and how your team loved and accepted you. Do you think you would have been so respected, or that people would have been so welcoming if you hadn’t been as good? I don’t think I would have continued playing, honestly. It probably would have been a situation where I do track my freshman year. I think that if I hadn’t have been good, I wouldn’t have gotten equal treatment. I don’t have any proof that’s the case, but I think about some of the kids who were at my high school, and I don’t know if they should get the benefit of the doubt.

Did that acceptance help you come out? Yes. I came out the summer after my senior year of high school. By that time, it seemed incredibly safe. I had an incredibly amazing experience with my family and close friends. When I got to school for music theatre that September, all those kids were way more accepting of me than I was [of myself] at the time. My experience of seeing other gay kids at my school who were out completely deterred me from coming out. I don’t know for sure if they were super bullied; I wasn’t in the same group of friends that they were. I think the bit of it I struggled and empathized with was that they just seemed to really struggle to find friends. There was nothing about high school that was fun or easy for them. High school should be a really exciting time to form relationships.

You talk a lot about the link between religion and sports. For me, because I never played sports, and for our readers didn’t either, what is that link between the two? It definitely is something I’m still trying to figure out. There’s a weird thing in CrossFit especially where there does seem to be this mentality of “thank you God for allowing me to be this strong.” And I get that, but at the same time, you made you this strong. It’s a very interesting thing to see them give credit to religion. I won’t say that it’s not big in other sports as well. It’s easy to look at professional sports as a whole: there are more religious people than we may realize. I don’t know why that is.

What steps can both pro and recreational sporting groups take to foster more of an inclusive attitude? I think the gay community has done so much amazing work in getting gay sporting groups together. When I went to school in Cleveland, the Gay Games were [there]. It was so great: all these sports get people active. They have a community. They get people moving. It has competitive nature to it, and it doesn’t have a super high burn out rate. Going to 24 Hour Fitness and walking on a treadmill for an hour—you’re not going to want to do that for the rest of your life. You’ll get bored. The solution is that gay athletes would feel comfortable enough in a league with anyone, not a gay soccer league. I think there’s a bigger goal there: that sports can be a place for everyone, not just the most masculine.

Who says you can’t hike when it’s raining?

The first thing we need to understand when writing workouts for ourselves is that routine is the enemy. If you’re someone who goes to the gym and does the same workout every time, I get it. For most of us, coming up with a gym routine is stressful enough the first time and there’s no way we’re going to risk looking stupid by trying new things. The problem with these routines though is that our bodies are super smart, and if we do the same fitness routine every time we go to the gym, we’re going to stop seeing results. In a fully equipped gym, we have a vast number of exercises we can cycle between. On the road, the best option for varying your workouts is changing the TYPE of workout you’re doing. . . Get some new ideas for workout types in the full blog post. Link in bio ??? . . ?: @anthonychatmonjr

Keeping with the tradition of shirtless pics in v cold locations. ? Findlay, OH. We’re coming for you! . . ?: @cheeportraits