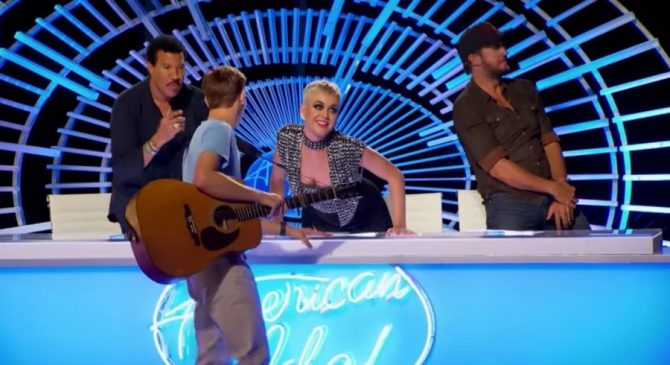 In a series of (now private) Instagram posts shared last weekend, actor Josh Kloss accused Perry of pulling down his sweatpants at a July 14, 2012 birthday party in Los Angeles and exposing him to partygoers.

“As I turned to introduce my friend, she pulled my Adidas sweats and underwear out as far as she could to show a couple of her guy friends, and the crowd around us, my penis,” Kloss alleges.

The accusations have divided Perry fans. Some are sticking up for the embattled singer…

I am very sorry your career didn’t exactly take off Josh Kloss. But I’ll never believe the things you’re saying about @katyperry. She was obviously just akwardly flirting with you if anything. This is boloney. I would consider it defamation of character.

The fact that it took Josh Kloss 9 years to speak out against Katy Perry for “sexual harassment” says one thing about him, he wants money too! Very ridiculous. He was just praising her a few months ago on how “grateful” he was because Katy had him in his tennage dream video.

I can ASSURE you that if @katyperry really assaulted that Josh Kloss guy at a PARTY, NINE YEARS ago, he would’ve spoken earlier. if he didnt others [at the party] would’ve. no he is just crazy obsessed with her. ever since shooting the video he wrote her songs, poems, had a…

While others are declaring her cancelled and using the hashtag #KatyPerryIsOverParty…

I believe Josh Kloss. Men should be awarded the same respect women get when they cry “me too” #KatyPerryIsOverParty

Take allegations seriously. Just because Josh Kloss is a man and the person he is accusing, Katy Perry, is a celebrity doesn’t mean the allegations are any less valid

so it turns out katy perry has sexually harassed josh kloss. #KatyPerryIsOverParty

Regardless of whether the incident with Kloss actually happened, the situation has reminded people of a time Perry really did behave in a way many felt was inappropriate.

All these people out here saying Josh Kloss is a liar clearly don’t remember when Katy Perry robbed that dude of his first kiss on American Idol and thought she was funny. I believe him.

eh i can believe it. When i saw Katy make that contestant on American Idol kiss her i knew something was fishy #joshkloss #KatyPerry

A clip from the episode has begun circulating online once again. In it, Perry can be seen fawning over 19-year-old contestant Benjamin Glaze during his audition.

When asked, “Have you kissed a girl and liked it?”, Glaze, who heralds from a small town in Oklahoma, replied that he hadn’t, and that he was saving his first kiss for his first “real relationship.”

That’s when Perry, who was nearly 15 years his senior, stood up and beckoned, “Come here! Come here right now!” Obviously nervous, Glaze walked over. Perry then proceeded to trick him into kissing her on the lips.

Afterwards, Glaze asked for water before performing for the judges, who ultimately declined to advance him to the next round.

Later, Glaze told The New York Times, “I was a tad bit uncomfortable” by the whole thing, adding that if Perry had actually asked him for a kiss, he would have declined, but that, ultimately, he didn’t hold anything against her as it helped give his music more exposure.

He added that he wasn’t happy with his audition, saying, “I should have picked another song to sing and calmed myself down regardless of the kiss. I should have been able to perform under pressure.”

Many pointed out the double standard in Perry’s behavior, saying that if the tables had been reversed, and it had been a male judge demanding a female contestant 15 years his junior kiss him at an audition only to cast her away moments later, people would have been outraged.

Perry, who has a large gay fan base, has featured drag stars in her live performances and became infamous for two of her early songs, “I Kissed a Girl” and her homophobic tune “Ur so gay,” never responded to the criticism.

She has also yet to respond to the allegations made by Kloss.