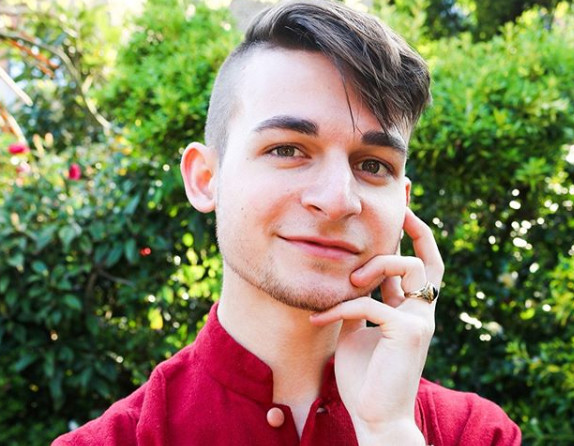 City: London. I was born in Pasadena but I was raised in San Louis Obispo. I moved originally to Wales to study. I lived there four years, and moved to London about six months ago.

Occupation: I’m a YouTuber, an actor and videographer. I also work a myriad of other freelance creative occupations.

Favorite Gym: I don’t currently have a gym. I had a gym in Cardiff, but haven’t found a new one yet. I’m one of those people that works out at home.

Favorite Exercise Playlist: My exercise playlist is a lot darker than my normal playlist. It’s a little bit intense. One of the songs I listen to a lot is “When I Die” by Alma. It’s not as dark as it sounds. It’s a lot more optimistic; it always makes me feel energetic.

Best Workout Food: I eat a lot of quinoa these days since it has a high protein content, and it tends to be quite good for you. I also eat a lot of yogurt parfaits. I have three eggs every morning. I wouldn’t exactly call it a diet, but I have some foods that give me a decent about of nutrients that I need.

Best Workout Outfit: My workout outfit is a pair of black sweatpants. That’s usually about it. When you work out at home you can wear whatever you want.

How do you balance staying in shape and having fun? I am sort of training to build muscle. I’m an ectoform, which is someone who has a high metabolism and doesn’t build muscle well. So I’m working on building muscle. I’ll also sometimes put fun aside after a workout. You’re not supposed to drink after a workout because it can sacrifice muscle proliferation, so I sacrifice nights out when I’m trying to train.

Basic Workout Tip: I think gym culture in the gay community is such a prevalent thing. There’s almost this expectation that you have to go to the gym, that you have to lead this elite fitness lifestyle. For people for whom money is tight, or time is tight, or the gym is far away, I think they need to recognize they don’t need to go to the gym. You can do it at home, at a comfortable pace.

You’re very vocal about the need for gay sex education. That’s something not taught in schools. What, in your mind, is the best way for queer people to learn more about their sexuality? I think there’s a growing number of resources online. I’m biased, but I’m one of those resources. Some are even in a more traditional style, and you can take courses. When schools aren’t willing to teach us about our bodies and our sexuality, one of the advantages of the internet is that those resources can be produced online. A lot of YouTubers now who create sex education content. A lot of those cover different topics within gay sex education, different experiences.

How did your own journey toward learning more about sex and sexuality begin? A lot of my own understanding of sex and sexual education, and of more obscure elements of sexuality have been from other people in my life, other sex educators and non-romantic partners. Some things have come from viewers as well. One of my latest videos covers a form of non-penetrative sex called “intercrural,” which was a term I had never heard before. I went and researched it and made a video about it because of that one comment.

Sexual labels are also something you find limiting, especially when it comes to type. Top, bottom, side, twink, daddy, etc. When are they good, when are they bad? When we’re talking about labels, even when it’s not something sexual like gender labels or anything that has to do with identity—we can have fun with them, and they’re fun to play around with. The problem is when labels is when they’re placed on other people without permission, and used to put people into boxes. Obviously, top and bottom can be useful labels. The problem is when personality traits are applied to those positions, or limit someone’s entire sexuality to those positions. It’s also important to recognize that labels are also really complex. If someone asks “Are you a top or a bottom?” there are other labels not included in that question. It’s helpful to not make assumptions about other people.

For those of us that grew up in homophobic or sexually repressed households, what’s the best advice you can offer people in getting over that shame? Shame is truly one of the most limiting experiences we can have as human beings. It held me back for a long time. I grew up in a very conservative, evangelical religious family. It caused me a lot of anxiety. Even when started becoming sexually active I had so much anxiety around sex and I was terrified. When you’re taught that relationships, love and sex are something exclusively for a man and a woman after marriage, it’s hard to unpack those ideas.

Related: Yogi Johnson Chong on how meditation helped him through trauma

For one thing, surrounding yourself with a community and environment to make you comfortable and that just welcomes questions is really valuable. Anyone can go on any of my videos and ask anything, even anonymously, and I’ll engage that. There’s a lot of controversy around safe spaces these days. I think it’s important for anyone struggling with gender or sexual orientation to have a safe space where they can ask questions and be open, whether that format is online or in a local community. I talk a lot about post-coital dysphoria, which is shame you get after sex or masturbation. It’s something a lot of LGBTQ people experience because so many of us carry that shame from religion or upbringing.

For something like post-coital dysphoria, what can you do to be prepared if you’ve experienced it yourself, or be prepared to cope with it if a partner experiences it? It is something I experienced a lot when I was still religious. When I moved away from the church and into the LGBTQ community, it went away. I also had a really loving partner at the time that helped me work through that. There are various levels of severity. It definitely doesn’t hurt to get professional help. There’s no shame in that. As a partner, reiterate to your partner constantly that you’re not ashamed of them, and that you don’t have shame either. There’s nothing wrong with them for having that experience. It’s good to label it, and help people understand. When you name something you struggle with, it takes a lot of the power out of it. Once you name the problem you can address it.

What’s the best way for someone inexperienced to explore their sexuality in a safe way? So much sexual trauma comes from bad experiences with ex’s that might be immature or insensitive themselves. How can we explore sex without being emotionally hurt? Great question. It’s hard to answer. Sex education is the gateway to having a better understanding, so educating yourself is a great way to move into a relationship in a healthy way. Even if you have no sexual experience whatsoever, everyone can take advantage of resources out there. Starting with a basic understanding of things like consent and relationships can be a good way to go into romance with a healthy idea of how to interact with each other. Making sure you understand your own sexuality and healthy boundaries, and maintaining the standard of not entering into a relationship just for the sake of intimacy.

What do you keep on your nightstand? I currently have a lot on my nightstand! I have my watch. I have multivitamins. I have my lamp. I have my earplugs. I have a beautiful painting of a kitten. I also have some paracetamols, which is like ibuprofen.

It’s my birthday in a couple of days which means I’m about to stop being a twink. ? Sadly I’m still not a twunk yet… ? I chat all about ageism and gay labels in my latest video, live now, link in bio!

I may be saying goodbye to Portugal’s sunny beaches and washed up masts today, but my ship has only just begun to sail! Tchau Portugal! ? ?: @coleledford11

I’ve never really understood the taboos around sex and what goes down in the bedroom. The more we talk about these things, the more we halt the spread of STD’s, destigmatize HIV, reduce sexual embarrassment and anxiety, and improve people’s sex lives! Although there is a difference between sex education and the over sexualisation of events like Pride. I like to create a space on my channel for sex education, where you can seek it out if you’re looking for it, but I have no desire to isolate those from my content who aren’t comfortable talking about sex. Today’s video talks about the complexities of the gay male sexuality, and a position that’s often omitted from portrayals of our sexuality on screen and general discussions surrounding gay sex. Give it a watch if you’re interested! And if you’re not, don’t worry! You’re valid and more than welcome in my little online community and the LGBT+ community as a whole. (And yes I’m a skinny boney boi but I’m trying to become more thicc ?) . . . . . #sex #gay #gaysex #sexed #instagay #gayboy #lgbt #youtuber #photography #photographer #men #boys #man #queer #rainbow #shirtless #naked #muscle #orlackthereof #skinny #legend #model

Happiest with a camera in my hand… If you haven’t yet, check out my Being Gay in France video, link in bio! ?????? . . . À huge shout out as well to my Patrons for helping me get this new stabiliser to make my videos prettier! It’s been incredible trying it out in my Paris travel vlog. If you want to support my work, you can join at Patreon.com/bradleybirkholz! ?

These last few months have been some of the craziest months of my life. I moved to London quite spontaneously, started working 3 jobs, and my life has completely changed. . ~~~~~~~~~~~~~~~~~~~~~~~~ . It’s been an exhilarating journey, but it’s also been an emotional roller-coaster. Working 3 jobs I’ve been busier and more stressed than ever before, struggled to maintain relationships, and been terrified I’ll miss out on opportunities because I simply don’t have the time anymore – and this week that culminated in a full burn out. . ~~~~~~~~~~~~~~~~~~~~~~~~~ . Through it all, however, I’m learning to be patient, time manage like a boss, and be grateful for where I’m at no matter how stressful it seems at times. . ~~~~~~~~~~~~~~~~~~~~~~~~~ . Thanks for reading and following this little digital footprint! ?: @izzyjoanmusic