Stepping out on a movie date this weekend? Netflix and chillin? Whatever your entertainment needs, we got your back (and hopefully your mind) with Queerty’s weekly “Culture Club” column with some of the highlights of new releases, streaming shows, classics worth revisiting, and what to drink while you watch.

This week, as we travel to cover the queerness of the Toronto International Film Festival, check out a few of our favorite overlooked titles from last year’s festival. Enjoy!

The Step-Out Screamer: IT Chapter 2

The much-anticipated conclusion to the Stephen King adaptation from 2017 finally hits theatres, and we’re happy to say, this time the queerness arrives intact. IT needlessly omitted themes of homophobia which play a key role in King’s original from the film version. We have it on good authority that a gay bashing, which sets off the return of Pennywise in the book, also features an important role in the new movie. That, coupled with a terrific cast that includes Jessica Chastain, James McAvoy and Bill Hader, is enough reason to give Chapter 2 a look.

We profiled this neglected costume drama about the noted bisexual author last year when it played at the Toronto International Film Festival. Keira Knightly shines in the title role, bringing a mix of intelligence, beauty and elegance to the film as only she can. Transgender activist Jake Graf has a brief but memorable role as a cis character, though the film’s standout is Denise Gough as  Mathilde de Morny, Colette’s sometime lover who was probably transgender. The movie revels in the fluidity of sexuality and gender, just like its subject which, in our estimation, means its worth a look.

The Overlooked: Giant Little Ones

Director Keith Behrman’s family drama also had a premiere at TIFF last year, though the film didn’t quite get the attention it deserved. We hope to rectify that problem now. Giant Little Ones stars Josh Wiggins as Frankie, a popular high school student dealing with his father (Kyle McLaughlan) coming out of the closet. As his parents’ marriage dissolves, Frankie has an encounter with his best friend Ballas (Darren Mann), which starts the rumor that Frankie might be gay. But there’s more to this story than it might first seem. Giant Little Ones has a few twists up its sleeve, and features enough fine performances to keep audiences interested.

Out director Justin Kelley continues the exploration of identity he began in films like King Cobra and I am Michael with this bonkers true story. In the late 90s, wannabe rock star Laura Albert (played by Laura Dern) rocks the literary establishment by posing as a bisexual, HIV+, androgynous male author named JT. When her books become unexpected hits, Laura enlists her sister-in-law Savannah (Kristen Stewart) to pose as JT in real life. What starts as a fluke becomes an elaborate and dangerous hoax, especially when a Hollywood starlet (Diane Kruger) falls for Savannah-as-JT, and Savannah shares in the passion. JT LeRoy got criminally overlooked at TIFF 2018, and earlier this year when it landed a wide release. A story this bizarre had to be true. A movie this fun deserves to be seen.

The Quickie: I Promised Her Life

Robert Nazar Arjoyan announces himself as an ambitious filmmaker with this short film about an Armenian-American mother grieving for the loss of her lesbian daughter. Though I Promised Her Life uses the dead daughter’s sexuality as a plot device, it does focus on part of the queer experience that other films overlook: the struggle of straight friends and family to sometimes understand LGBTQ life, and how parent-relationships often go beyond simple love or hate, into feelings far more complex.

The Sip: The Pennywise 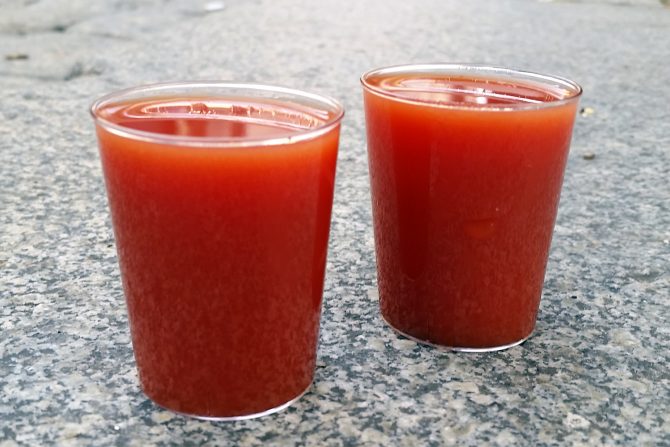 Much like its namesake character, this Tequila infused shot packs one heck of a punch…enough so that you might just feel yourself float. Recommendation: don’t watch anything with clowns while partaking.

Mix well and serve as a shot.