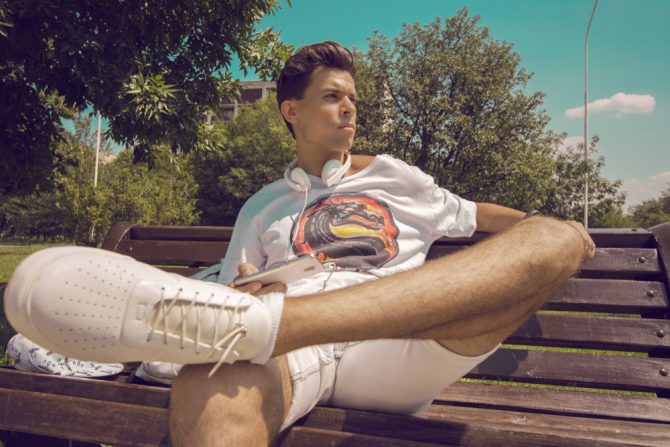 Matiazi recently sketched the design for a “bi-chair” for “people who can’t sit straight.”

When Israel Walker, an amateur woodworker, saw the design, he used it build the chair for his queer daughter then posted about it on social media, where it quickly went viral.

So, an artist named Má Matiazi drew this awesome sketch “The Bi-Chair: for people who can’t sit straight”. My daughter…

“My daughter loves the chair,” Walker tells Bored Panda. “She is really excited about how much positive attention we’ve gotten for bi and non-binary folks.”

“I’m happy to see people sharing and having fun with the sketch,” Matiazi adds. “Bisexuality is invisible in most conversations, so it’s nice to see my sketch about it getting so much visibility.”

And now, the tweets…

if you’re reading this, i can bet you’re gay + aren’t sitting properly

they were right about gay people not being able to sit on chairs properly pic.twitter.com/FFSNt2PMOJ

why don’t gays know how to sit in chairs?? i’m observing all these straight men & they are sitting in them so properly!!

why is not sitting properly such a Gay thing???? Why is it so Accurate

Sit in the big chair?? What does he mean?? I’m gay I can’t sit in any chair properly let alone a big chair?? Oh god he’s coming back pick one quick… C ??? pic.twitter.com/icFRfgcwdE

I think about if one day I end up having an office job, but I am honestly one of those gays who cannot sit properly so

I’m gay, how am I supposed to sit properly on our sofa, dad?

It is physically impossible.

This is how gays sit pic.twitter.com/4MxC3V7tVq

Just saw a mum in a restaurant make her son sit properly in his chair, hang in there baby gay, when you come out you can sit however you want!

Can confirm that that “gay people don’t know how to sit properly (or how to draw people sitting properly) at all” thing is real ? pic.twitter.com/0azZOGTDja

how to tell they’re gay:

• they do not sit in chairs properly.

the real homosexual agenda is sitting on tables. or floors. or two chairs at once with your feet up on the other chair.

Gays and bis don’t know how to sit.

me: haha those “gay people cant sit on chairs properly jokes” arent accurate
also me, sitting like this and using my laptop for the past 5 minutes: pic.twitter.com/YBjnMSu1lf

me when i encounter a gay alien at area 51 who doesn’t have healthy coping mechanisms, blames astrology for it’s problems, can’t sit properly, has no math skills and has an irregular sleeping & eating pattern: pic.twitter.com/CdlK3femVA

Do gays rly cant sit properly??? Like..i see lots of people saying this…is that rly true or are yall rly just clowning e/o?????? If that’s true…
How do yall sit???? Do you cross your legs??? Spread your legs to take up as much space as possible???

when they say the gays can’t sit properly…

me the gay cousin on Thursday at thanksgiving sitting on the counter because I can’t sit in a chair properly pic.twitter.com/L8weOrAnwQ

Related: 30 tweets about gays and walking fast that are categorically true