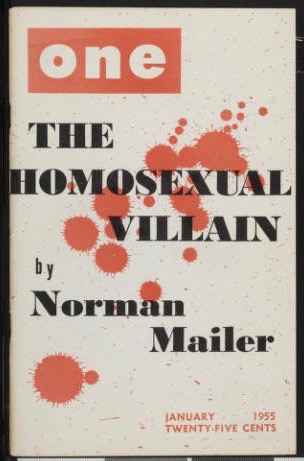 In honor of LGBTQ History Month, we’re taking a deep dive look-back at the first gay publication in America—ONE magazine. Launched in Los Angeles in 1953, ONE was published by One, Inc., which grew from The Mattachine Society, the seminal gay-rights group founded by Harry Hay. Its editorial founders were Martin Block, Don Slater, and Dale Jennings, who also served as editor-in-chief. Produced on a shoestring and sold for 25 cents, ONE began to change the course of history with an unapologetic exploration of homosexuality and the largely unexamined societal taboo against it.

This is the third in our series of ONE magazine cover stories.

Imagine scoring one of America’s top novelists to pen an essay for your fringe publication. That’s exactly what happened when Norman Mailer wrote this cover story in 1955:

Those readers of ONE who are familiar with my work may be somewhat surprised to find me writing for this magazine. After all, I have been as guilty as any contemporary novelist in attributing unpleasant, ridiculous, or sinister connotations to the homosexual (or more accurately, bisexual) characters in my novels.

Mailer admits that, for most of his life, he knew homosexuals only in passing, and tended to quickly disregard them. His first two novels, The Naked and the Dead, and Barbary Shore, both featured queer antagonists. Then, he and his wife became friends with their neighbor, a gay painter, and his eyes began to open.

Shortly after, he received a free copy of ONE, which prompted him to borrow his neighbor’s copy of Donald Webster Cory’s The Homosexual in America.

I can think of few books which cut so radically at my prejudices and altered my ideas so profoundly…. With this came the realization that I had been closing myself off from understanding a very large part of life. … For the first time I came to understand homosexual persecution to be a political act and a reactionary act, and I was properly ashamed of myself.

Mailer goes on to describe how he suddenly wished to rewrite a “ludicrous” homosexual character in the novel he was then finishing, The Deer Park. But since the novel was almost done, he found it impossible to redraw the character from scratch, so instead, he tried adding a more human dimension to him.

The difficulty of finding a character who can serve as one’s protagonist is matched only by the difficult in finding one’s villain, and so long as I was able to preserve my prejudices, my literary villains were at hand. Now, the problem will be more difficult, but I suspect it may be rewarding too, for deep down I was never very happy nor proud of myself at whipping homosexual straw-boys.

Pretty impressive. Mailer may have never gotten around to similarly deepening his female characters, but hey, nobody’s perfect.

Thanks to One Archives for making this series possible. ONE Archives Foundation provides access to original source material at the ONE National Gay & Lesbian Archives at the University of Southern California Libraries—the largest such collection in the world.