Everyone’s pissed at Ellen for being friends with George W. Bush… but what about Michelle Obama? 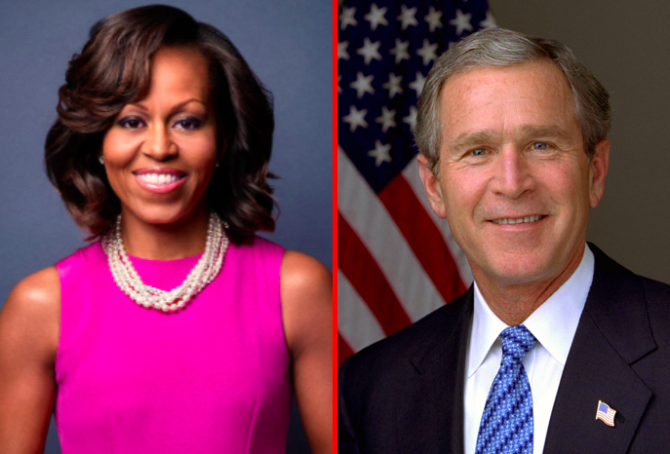 So everyone’s pissed at Ellen because she was spotted at a Dallas Cowboys game over the weekend sitting next to George W. Bush. Not only that, but she later admitted that, yes, she’s friends with the former president and, yes, they had a “fun” time together at the game.

Quick! Let’s all write to NBCUniversal and demand she be fired. Better yet, someone call the executioner. (That was hyperbole.)

Yes, that was me at the Cowboys game with George W. Bush over the weekend. Here’s the whole story. pic.twitter.com/AYiwY5gTIS

But all this outrage being lodged at Ellen seems a little misguided and, frankly, kinda fake. Because if you’re mad at Ellen for being friends with George W., then you should probably also be mad at former first lady Michelle Obama. After all, she and Georgie have formed a deep and well-documented friendship over the last decade.

In fact, Town & Country recently did a story about the unlikely pair and all the “heart-warming moments” they’ve shared over the years, like that time he gave her a piece of candy at his father’s funeral, which she graciously accepted. Everyone thought that was really sweet.

A sweet moment on a sad day. ? George W. Bush slipped Michelle Obama a piece of candy during #GeorgeHWBushFuneral, and the Obamas’ reactions were everything. pic.twitter.com/rpCj3A3si1

Last year, Mrs. Obama, a noted LGBTQ ally, famously called George W. “a wonderful man” and said “I love him to death” on the TODAY show.

“President Bush and I, we are forever seatmates because of protocol, and that’s how we sit at all the official functions,” she said. “He’s my partner in crime at every major thing where all the ‘formers’ gather. So we’re together all the time. I love him to death. He’s a wonderful man, he’s a funny man.”

“I think that our relationship reminds us that we can get there,” says @MichelleObama on the friendship she has with former President George Bush and why their relationship stands out in this political climate. pic.twitter.com/Use6jbXB8b

But if we’re able to understand that her friendship with George W. Bush doesn’t define who she is as a person, then why can’t we do the same for Ellen?

Sure, Ellen may be out of touch with the average LGBTQ person. (Having a net worth of $400 million can do that to an individual.) And, yes, she has disappointed us in the past. (Her refusal to comment on longtime BFF Drew Brees’ involvement with Focus on the Family last month year was frustrating.) But most people would agree that she’s not a terrible, awful person with a poisonous heart. In fact, she’s a pretty good role model and an inspiration to many. She’s just flawed, like everyone else.

And she certainly doesn’t deserve to be burned at the stake for sitting next to a dude who doesn’t know how to properly put on a poncho.

This makes me feel better for just a second. Ponchos of Mass Destruction. #bushponcho #lynnejordan #inauguration

The Supreme Court is about to decide whether it should be legal for employers in America to fire people for being LGBTQ and there is a very good chance that they’re going to rule in favor of the homophobes. Surely, that deserves a little more outrage than this.

Let’s save our torches and pitchforks for the fights that actually matter.