Elizabeth Warren wins the internet with her response to a homophobe 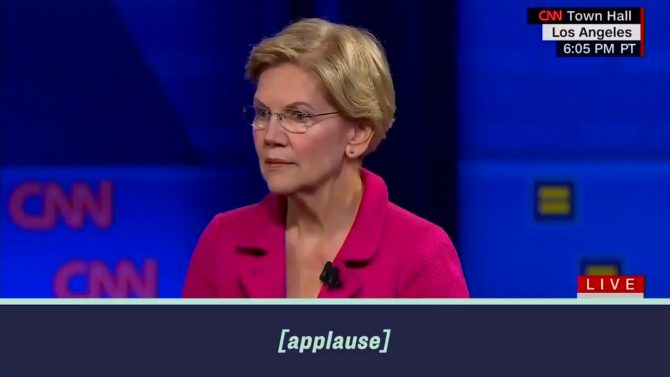 Sen. Elizabeth Warren has become a viral sensation after her response to a question during the LGBTQ issues CNN Town Hall forum.

During the course of Warren’s Q&A, a man in the audience asked for her hypothetical response if a voter approached her insisting that marriage should only be between one man and one woman. The Massachusetts Senator didn’t hesitate with her response.

“I’m going to assume it was a guy who said that,” Warren quipped to laughs from the crowd.  “And I’m going to say then just marry one woman. I’m cool with that!” Her remarks invited laughter and thunderous applause from the audience.

“Assuming you can find one,” Warren then added, fueling the cheers in the crowd.

How would I respond to someone who says marriage is between one man and one woman? #EqualityTownHall pic.twitter.com/8uNXqXI5n7

Warren then went on to affirm that she has always supported marriage equality, even growing up in a conservative household. She further elaborated that her religious upbringing taught her that the world is full of different kinds of people, all of whom have worth, and all of whom are part of God’s creation.

Related: Watch Shangela teach Kamala Harris how to clack a fan at a gay bar

At present, Warren vies with former Vice President Joe Biden as the frontrunner for the 2020 Democratic nomination. Polls have her beating Donald Trump in a head to head matchup by about ten points.