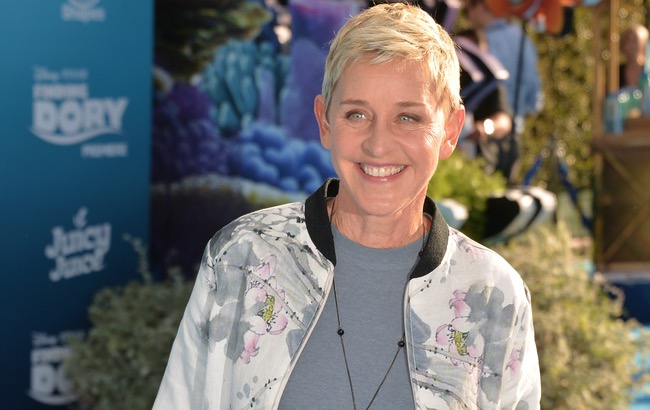 One of Ellen DeGeneres’ most vocal critics has pointed out that, years before she hung out with former President George W. Bush, the comedian acted friendly with one Donald J. Trump.

According to a 2006 People profile of Donald and Melania’s “Billion-Dollar Boy,” Barron Trump, DeGeneres gave the future President and First Lady a gilded stroller:

“In the Trumps’ $100 million triplex penthouse, gifts from friends — including a golden stroller complete with its own chandelier (courtesy of Ellen DeGeneres) and gazillions of onesies — greeted Barron’s arrival. ‘It’s fun,’ says Melania of the stroller. ‘It makes you laugh.’”

“Trumps’ $100 million triplex penthouse, gifts from friends – including a golden stroller complete with its own chandelier (courtesy of Ellen DeGeneres) and gazillions of onesies – greeted Barron’s arrival. “It’s fun,” says Melania of the stroller. “It makes you laugh.” – People pic.twitter.com/3zJrT59ov1

DeGeneres stoked outrage this month by yukking it up with Bush at a Dallas Cowboys-Green Bay Packers game on October 6. A couple of days later, she defended herself on her self-named talk show, saying, “I’m friends with George Bush. In fact, I’m friends with a lot of people who don’t share the same beliefs that I have. We’re all different. And I think we’ve forgotten that that’s OK that we’re all different. … When I say be kind to one another, I don’t mean only the people that think the same way as you do. I mean be kind to everyone.”

But her justification didn’t sit well those who remembered Bush’s anti-LGBTQ politics and his role in the wars in Iraq and Afghanistan. Even other Hollywood celebs decried DeGeneres’ stance. “Sorry, until George W. Bush is brought to justice for the crimes of the Iraq War, (including American-lead torture, Iraqi deaths & displacement, and the deep scars—emotional & otherwise—inflicted on our military that served his folly), we can’t even begin to talk about kindness,” Mark Ruffalo tweeted.

Tech creative Rafael Shimunov created a satirical version of DeGeneres’ on-air monologue, superimposing images of the Iraq War on the Ellen set’s backdrop. He later crafted another version, this one showing scenes of devastation in the wake of Hurricane Katrina.

As Ellen DeGeneres Show continues to submit false copyright claims on legally protected satire in order to stop my viral video about her friendship with GW Bush, please do share the Youtube version (and find me on Facebook for that version too).https://t.co/jl2xeNanUg

And on October 14, he posted the People quote about DeGeneres’ stroller gift. “Grotesque,” one commenter wrote. Another added, “Gross.”

For what it’s worth, DeGeneres seems not to be friendly with Trump these days. In 2017, she revealed on Today that she would never host the current POTUS on her talk show. “No, because I’m not going to change his mind,” she said. “He’s against everything that I stand for. We need to look at someone else who looks different than us and believes in something that we don’t believe in and still accept them and still let them have their rights.”