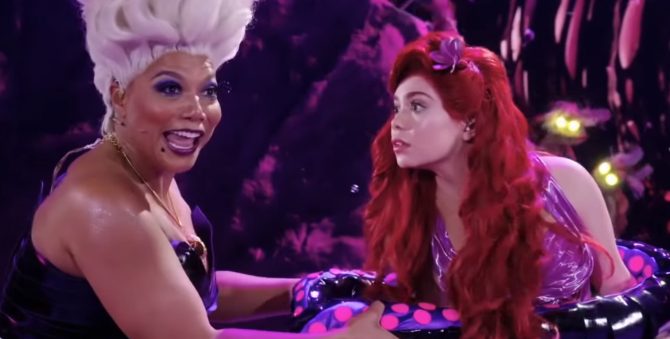 For anyone who missed out on ABC’s live production of The Little Mermaid, take heart: One of the show’s best songs is ready to be streamed.

The Little Mermaid: Live starred Auliʻi Cravalho, Graham Phillips, John Stamos and Shaggy, though the biggest scene-stealer of the night should come as no surprise. Academy Award-nominee Queen Latifah stepped into the tentacles of the sea witch Ursula, and proceeded to win the evening.

The highlight for Latifah came with Usula’s barnburner number “Poor Unfortunate Souls,” which gave the singer/actress ample opportunity to show off her dramatic and vocal ranges. Aided by some great special effects, lighting and inventive puppetry, Latifah slid and slunk around the stage belting out the song to cries of joy from the audience.

If nothing else, The Little Mermaid: Live raises the bar on what fans can expect from Disney’s forthcoming live-action remake of the classic animated film. Awkwafina, who will play Ursula in that version, has a tough act to follow.