Surprise, surprise — ‘they’ has been used as a singular pronoun for 600 years 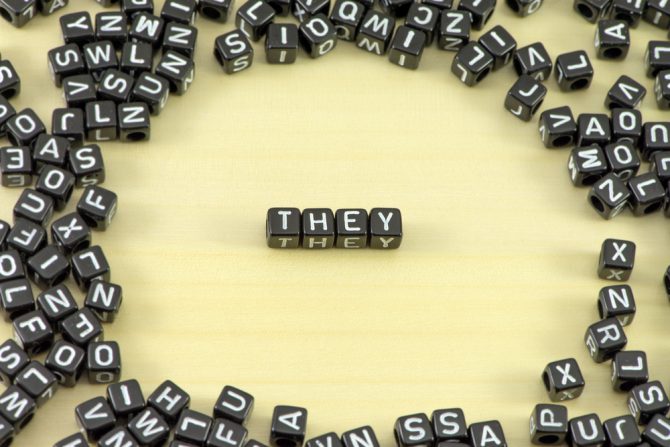 After declaring the violence epidemic against transgender people a “myth,” journalist and self-described “gay conservative” Chad Felix Greene is now attacking the idea of the use of “they” as a singular pronoun and criticizing the APA for endorsing the usage.

“The APA style guide is widely used in academic writing, and the decision to essentially create a new usage from an established pronoun is absurd,” he writes for The Federalist, a website that veers to the extreme right side of Media Bias Fact Check’s spectrum.

“I am certainly not a ‘they,’ and I shudder to imagine a society that prefers to see me as a generic and inclusive pronoun, rather than a whole and autonomous person,” he adds. (Unsurprisingly, Greene mispronouned the nonbinary singer Sam Smith in his argument.)

But this usage is hardly “new,” as University of Illinois at Urbana-Champaign professor of English and linguistics Dennis Baron pointed out in a 2018 Oxford English Dictionary blog post:

“The Oxford English Dictionary traces singular they back to 1375, where it appears in the medieval romance William and the Werewolf. … Since forms may exist in speech long before they’re written down, it’s likely that singular they was common even before the late fourteenth century. That makes an old form even older.”

Linguist Geoff Nunberg spoke similar truths on NPR’s Fresh Air in 2016 after the American Dialect Society made “they” their word of the year for 2015 and after President Barack Obama used “they” as a singular pronoun in his State of the Union address.

“This use of ‘they’ has been around for a long time,” Nunberg said. “It shows up in Shakespeare, Dickens and George Bernard Shaw. Jane Austen was always saying things like ‘everybody has their failing.’”

(He also pointed out that the New Yorker’s Mary Norris decreed the singular “they” as “just wrong” in her book Between You & Me, just a few pages after writing this sentence: “Nobody wanted to think they were not essential.”)

Greene was right about one thing, at least: “They” is indeed an established pronoun. It’s just not “established” in the way he thinks. Haters gonna hate, but we’ll side with William Shakespeare, Jane Austen, the APA, the Oxford English Dictionary, Merriam-Webster, and everyone who embraces the pronouns of their peers.