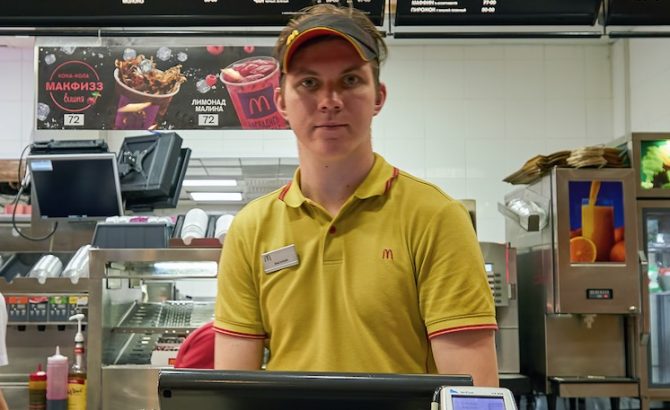 Love life, supersized! A Reddit user said he asked out a McDonald’s employee and got a date out of the proposition, but his story has other users divided.

In a now-deleted post, the Redditor said he asked out the guy behind the counter, and the guy turned him down and explained that he was already seeing someone. “But today he messaged me saying he hasn’t stopped thinking about that day and how he declined out of shock,” the user wrote in a follow-up post. “He told me deep down he wanted to say yes but just got scared. He wants to meet me.”

“I am absolutely dumbfounded,” he added. “I feel like the happiest man alive right now! Just thought I’d share cause life is surprising. Never stop searching.”

Related: 10 rules for asking out a man on the first date in the age of Grindr

While some commenters celebrated his success — “Get that McFlurry you bitch!” one wrote — others criticized him for asking someone out at that person’s workplace.

“Never hit on servers when they are working because you are putting them in an awkward situation where they can’t walk away from,” one wrote.

“It only takes 1% of the dudes to think this is okay to make it miserable for a worker who is required to be nice to hundreds of people a day,” observed another. “For every one of these nice [guys], there’s likely 10 skeezier or creepy guys who think it’s cool to do this and might not take a hint.”

“Good for the McDonald’s-story-guy that everything worked out in his favor, but that’s definitely not the norm, or to me that isn’t,” the user added. “I don’t know how many people here have actually worked in the service industry and know how awkward some of these situations can be. Sure, it’s all fun and games if the person you’re talking to stays polite even after being rejected, but I’ve seen customers losing their sh*t because of rejections. More so when there are a group of people — say, friends — and one of the guys asks an employee for her number.”

The user continued: “I’m proud and out, despite that I still wouldn’t like anyone to ask me for my number whilst working. Slip me your number and the choice is mine to make whether I want to give you a call or not. The power play is a completely different ordeal in this situation.”

Related: Real struggles of being gay at work are revealed on Whisper

Still, other Redditors begged to differ. “Honestly, people were overreacting… you were fine to ask him as long as [you] were being discreet about it,” one wrote. “As things turned out, it seems like he appreciated your boldness. Good luck to things between you two.”

Commented another: “People enjoy reacting to their version of a ‘social issue,’ their ideas of how problematic it could get, all the different scenarios it happens in… rather than just talk about the situation that we’re talking about. Most of them know that the average customer service employee receives many kinds of inappropriate interactions, on the regular, that drain or affect them. You’re asking him a simple question, getting a ‘no,’ and moving on with your day, doesn’t need a full ‘Power Imbalances in the Workplace’ behavioral lesson.”

And one user pointed out a different issue entirely: “Update us if he smells like French fries.”