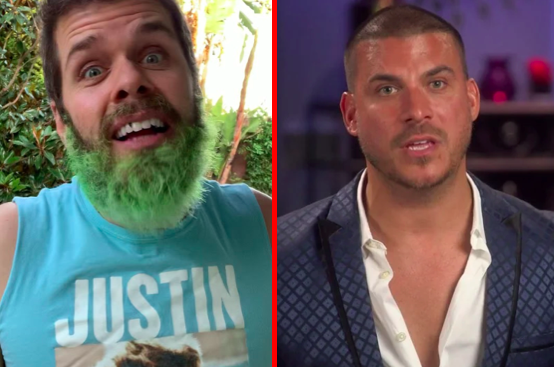 Vanderpump Rules star Jax Taylor made headlines earlier this month when he spouted off homophobic remarks on Twitter then claimed he can’t be antigay because he used to live in West Hollywood and 50 percent of his friends are homosexual.

Now, he’s back in the headlines, this time for instigating a Twitter feud with none other than gay blogger Perez Hilton.

It all started over the weekend when Taylor tweeted a screenshot of Hilton along with the caption, “All this dude does is make fun of peoples looks… Seriously.”

All this dude does is make fun of peoples looks… Seriously. pic.twitter.com/QAWme3sUQK

It didn’t take long for Hilton to respond. In an Instagram post, he wrote, “@MrJaxTaylor from Vanderpump Rules didn’t even have the balls to @ me! I haven’t talked sh*t about people’s physical appearance since 2010. I do have opinions, however, about sh*t people–like Jax.”

He continued: “The hypocrisy of attacking my looks for the same thing he falsely accused me of is lost on him. No one has ever accused Jax Taylor of being smart!”

He choose to follow his initial response with second one, which made an unnecessary bi-phobic jab at Taylor.

Wrote Hilton: “He took the time to post about me on Instagram Story AND Twitter. Maybe the rumors of @MrJaxTaylor being bisexual are true! Sorry, boo. You can’t have a piece of me. I don’t want your STDS!”

He took the time to post about me on Instagram Story AND Twitter. Maybe the rumors of @MrJaxTaylor being bisexual are true! Sorry, boo. You can’t have a piece of me. I don’t want your STDS! https://twitter.com/mrjaxtaylor/status/1198818959002222592

In 2015, Taylor became the subject of bisexual rumors when a man claimed he had developed a close friendship with him in Miami, telling Radar Online, “With Jax, there is always a celebration of everyone: man or woman. He has a great sensitivity.” The rumors proved to be just that: rumors. But that didn’t stop Hilton from dredging them back up again nearly five years later.

Now, here’s what’s wrong with Hilton’s post: Aside from using bisexuality as a weapon against Taylor, implying that being bisexual is something someone should be criticized for or ashamed of, he also maintains the myth that bisexuals are promiscuous and have STDs.

As a member of the LGBTQ community, he should know the damage of perpetuating these sorts of attitudes.

This isn’t the first time Hilton has made ignorant remarks about sexuality either. Last month, for National Coming Out Day, he posted a video in which he jokingly “came out” as asexual, laughing about how he hadn’t had sex with anyone since February 2016. (Note: asexuality is a distinct sexual orientation and is not simply being abstinent, celibate, or unable to find a partner.)

For someone who claims to be “woke” about sexuality and a fighter for LGBTQ acceptance and equality, Hilton still has some waking up to do himself.