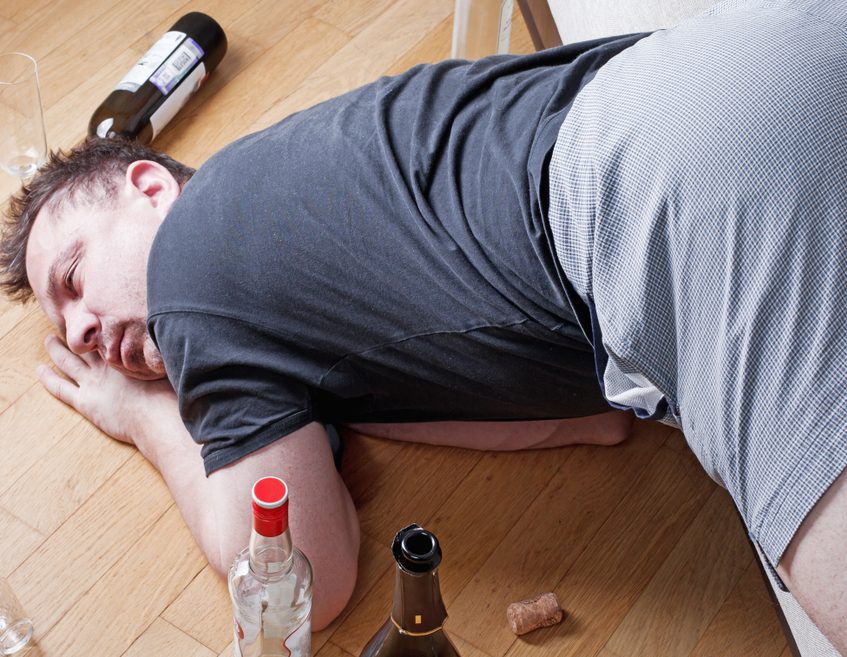 The first time I bottomed was when I was eighteen and in college and my friends had just thrown me into the snow rather than let campus security see me blacked out and swaying to each side, being pushed by invisible forces. Oblivious to the drama and suddenly in the snow, I began making snow angels. Someone wrote on a school-wide discussion board two years later that I was a “gay mess,” which was not helpful.

But this essay isn’t about that. It’s about alcoholism.

I realized I was a heavy drinker at some point between that night I made snow angels and the night I landed in an ER for overdosing on sleeping pills. Most people would quit drinking after becoming so depressed that they O.D.’d on sleeping pills, but I’m not most people. My reaction instead was, “Gurl, I am so stressed from O.D.’ing. Gimme a drink! I need to get pounded tonight!” The nurse replied: “Sir, I’m a nurse.”

Thus, I continued to drink — harder, faster, stronger — until I convinced myself that I was happy and carefree and drinking for not-insane reasons. As a result, I kept bottoming.

Once, when I was twenty, I stumbled off the sidewalk of a busy New Zealand street and crawled into a homeless woman’s lap, recreating the Pietà. My friends dragged me away before I could projectile vomit into her face.

Another time, when I was twenty-two and blacked out, I decided to sleep under an awning in NYC instead of walking twenty feet to the subway. When I woke up the next morning, I told the crazy homeless guy who slept there to follow me on Instagram. He didn’t have a phone. He still grinned and said he’d follow me. I wonder if he’s going to kill me!

I know y’all are waiting for me to say when I hit my true rock bottom — like, when I realized I needed to quit drinking. But the truth is: I never hit rock bottom. I just kept digging until the dirt fell over my head.

If you want me to tell you a traditional story of regret and self destruction, I guess I could tell you that I once slept with a heroin addict named “Crazy Aaron” and shrugged it off as part of being 19, or that I burst into my mom’s hotel room at 4am one night and threw up in front of her, or that I O.D.’d my junior year of college. Oh, I already told you about that? Sorry, the years of heavy drinking have caused me to forget things. I graduated second in my class in high school.

It’s probably sufficient to tell you that I woke up one day without a job, without money, without real friends, and with an overwhelming desire to change. Then, two years ago, I threw up in a New York City subway car, causing passengers to actually leave the car. Then I quit for good.

Since that night two years ago, I have been offered booze by many, many people. Some of those people were frenemies or fellow alcoholics who were aware that I was sober. (I avoid them now.) But despite those tempting moments, I only recently confronted the greatest test to my sobriety.

In August, I was traveling through Europe solo — a privilege I could afford because I wasn’t spending my limited earnings on booze anymore. And without the vice grip of alcohol holding me hostage, I reveled in the continent’s beauty. In Barcelona, I glided past bars and visited La Sagrada Família, delighting in its undulating freakishness. On a hill overlooking the city, I deleted Grindr and read The Age of Innocence, then re-downloaded Grindr again. In Bilbao, I embarked upon a Transatlantic love affair with a recalcitrant Basque man who had just finished The Age of Innocence as well.

And while I heard the siren call of booze wherever I went, it only tempted me once.

I had just strolled into Barcelona’s Picasso Museum and engaged in athletic eye sex with a cute gay couple. Minutes later, we were talking and they were telling me that they were in town for Circuit Festival–Barcelona’s answer to World Pride. They invited me to pregame at their place that night.

It was such a simple request, and from two strangers unaware of my struggle. They weren’t frenemies trying to uproot my sobriety. They weren’t alcoholics inviting me back into hell. They were just two happy, well-adjusted people who had assumed I liked to drink for fun and not to dilute the poison in my brain.

Instead, I smiled, declined, and meditated in front of Picasso’s Las Meninas for a spell. When I did bottom again, it was three days later and in Bilbao. And it was in the sex way.

Evan Lambert is a Staff Writer for Topix.com. November 25, 2019 marked his two year sobriety anniversary. His Twitter handle is @evlams, and he’ll start tweeting again if, like, five people follow him after this.