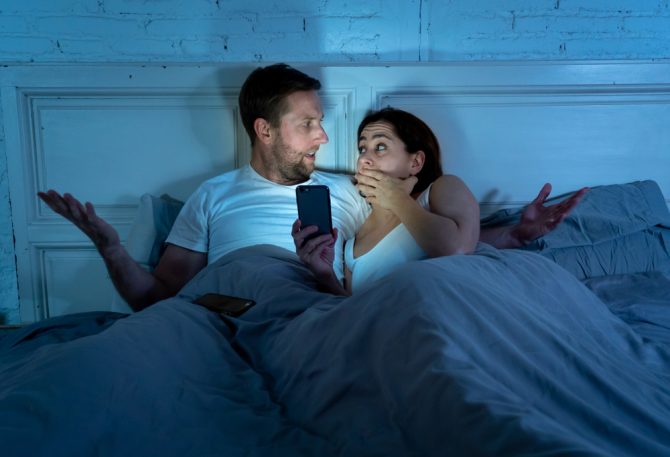 A woman is convinced her new boyfriend is gay after hearing him speak to an “effeminate” man on the phone and then learning he knows his friends, ahem, size, so she’s writing to advice columnist Stoya over at Slate for help.

“I’m dating a man who admitted having sex with another man many years ago while on drugs,” the letter begins.

The woman, who only recently began dating again after getting divorced, says her boyfriend, now sober, insists the hookup was “a one-time-only thing,” but she has her suspicions.

“His stories conflict,” she writes. “He is kind and loving in every way. But he’s done several things that make me question him: He recently referred to a male friend’s penis size as ‘dead weight.’ How would he know that?”

She continues, “Then, when watching a movie, he blurted out regarding a male actor: ‘He’s beautiful.’ Which is an odd way to describe another man.”

But it doesn’t stop there.

“Then, I received a phone call that I overheard (speakerphone) from a man asking in an effeminate voice ‘What do you need today?’” the woman adds. “He immediately ended the call and acted upset.”

She continues, “Finally, when we visited a city with a very large gay population, he knew the gay neighborhood … well. This actually happened in two cities, one of which he lived in while married and separated.”

All of this has her wondering: Is her boyfriend a closeted homosexual?

“I believe I’ve answered these questions myself, just in asking,” she concludes.

In her response, Stoya struggles with how to answer the woman’s letter.

“I’m not sure what questions you’re asking, so I’m relieved to hear that you believe you’ve answered them yourself,” she writes. “While you’re here, though, I’ll give you my thoughts.”

She goes on to say the woman sounds “really hung up on this” and that maybe she needs to take a deep breath and relax for a second.

“I don’t think you have a smoking gun that this man is gay,” she writes, “but I also suspect you conceive of gay and straight as a binary situation.”

“Really, it’s a spectrum that sometimes intersects with other spectrums—like gender expression, relationship structure style, and sexual interests—and some people are off in an asterisk-shaped paradise.”

She continues, “Maybe he did sleep with a guy more than one time, and maybe it is part of his sexuality, but that doesn’t mean it defines him.”

The bottom line: If this woman wants to make things work with her boyfriend, she’s gotta change her way of thinking.

What do you think of this situation and Stoya’s advice? Sound off in the comments section below…