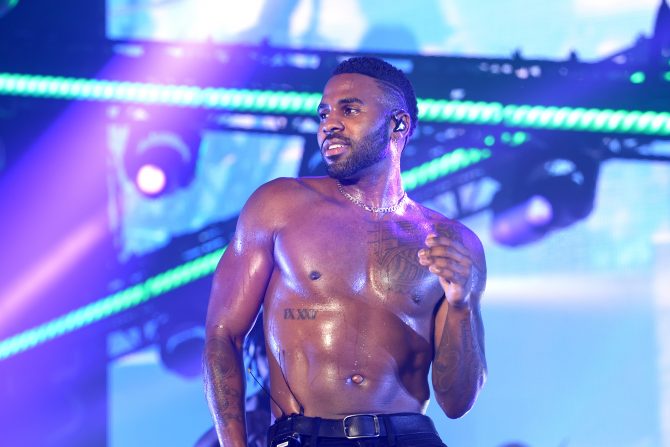 Responding to the offer on Instagram, however, Derulo wrote, “Imma need a wayyy bigger bag than that,” adding the money-mouth face emoji.

Related: Max Emerson “rises to the occasion” in a pair of ultra-revealing boxer-briefs

In case you missed the news last month, the Cats star posted an Instagram photo of himself emerging from a pool in Bali, with a noticeable bulge in his shorts. When a fan asked “What animal are you hiding in your pants?” he answered, “Anaconda.”

@jasonderulo broke the internet with this Instagram photo and now he’s responding to speculation that it was photoshopped. Tap this pic at the link in bio to find out what he said, plus watch video of his response. #JasonDerulo Photo: @jasonderulo/David Strbik

Earlier this month, however, Instagram took the post offline, saying it violated the “community guidelines on nudity or sexual activity.” According to TMZ, a Facebook spokesperson said the post was nixed because it featured “aroused genitalia.”

Derulo, who previously credited his Haitian heritage for his bulge, responded to the censorship via social media. “All these girls be on Instagram showing they ass and all kind of crazy shit, and I got underwear on … and they took my pic down,” he observed. “It’s discrimination. Like, I understand. I can’t help my size. But you can’t take down my pic, man.”

Plus, as he later told TMZ, he was only semi-aroused. “I was not aroused. … I might have had a ‘semi,’” he told the site. “An arousal looks different. It’s a different vibe. When it’s fully aroused, it’s a different beast. It leans more to the front. You feeling me? Yeah, so if it’s just on the side, and it’s just chilling on the side, it’s a ‘semi’ vibe.”