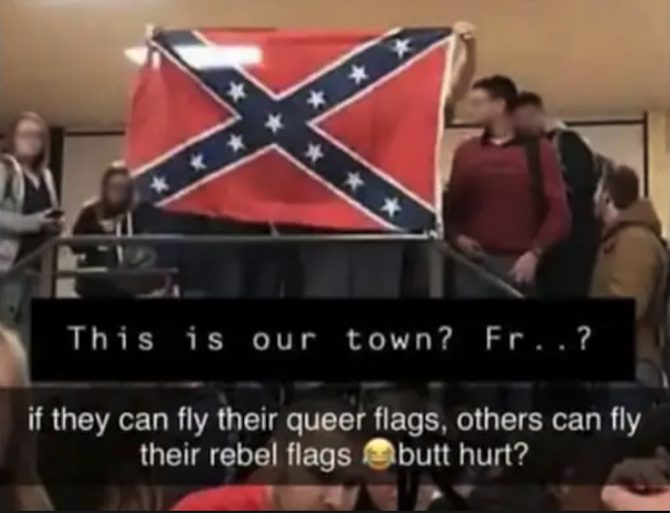 A group of students at West Plains High School in Missouri didn’t like the rainbow pride flags some of their classmates were handing out at school last week… so they raised a Confederate flag in the cafeteria.

Just another day in Trump’s America.

“People would put them like sticking out of backpacks or just carry them around,” she explains, calling it “a good way to show people that they’re not alone.”

“On Monday, I saw a girl walking down the hallway and she had like a gay pride flag in her hair, in her ponytail,” junior Abigail Lipford adds.

Well, evidently, a group of young, white, mostly males students found the act of solidarity and inclusiveness triggering, so they brought a Confederate flag to school the next day and waved it around the cafeteria.

“I noticed two boys get up and they have the Confederate flag and they’re like showing it to the lunchroom in the senior cafe,” Lipford explains.

“I was kind of mad because you can have your flag and that’s fine but it’s like they were using it as retaliation,” Schilmoeller adds.

Eventually, a teacher stepped in and took the racist flag away from the students.

Luke Boyer, assistant superintendent of the school district, tells BuzzFeed News that the whole thing has “been blown way out of proportion” by the media and some reports about what had happened simply aren’t true, though he declined to elaborate.

The school says nobody will be punished for the incident and that they instead hope to “teach our students to respect each other and to respect different viewpoints on a variety of social issues.”

Evidently, at West Plains High School, waving a white supremacist flag is just a “different viewpoint” from LGBTQ equality and should be “respected.”

Like we already said… Just another day in Trump’s America.

Related: Trump just became the third president in U.S. history to be impeached. Now, the memes…