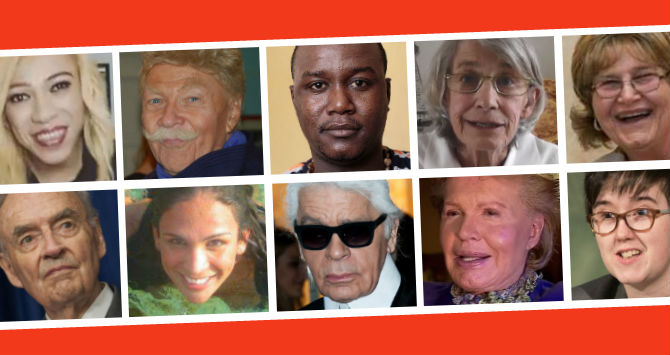 Some of the notable LGBTQ figures we lost in 2019.

Fashion designer Karl Lagerfeld died February 19, aged 85. Lagerfeld was born in Hamburg in 1933: the son of a businessman and former lingerie saleswoman. He undertook his secondary schooling in Paris, after which he took up a job as an apprenticeship with the designer Pierre Balmain. 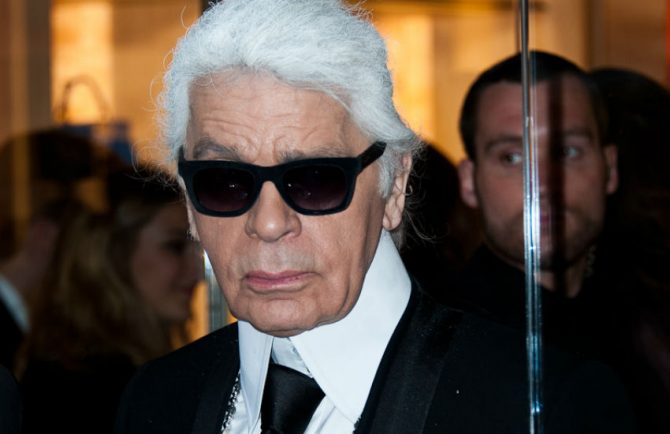 He designed his first haute couture collection, for Jean Patou, in 1958. Lagerfeld built a name for himself during the 1960s, working extensively with Chloe, Curiel, and Fendi. Lagerfeld was appointed creative director for Chanel in 1983, which is when he truly became a global fashion brand.

US comic and actor Rip Taylor died early October in Beverley Hills, West Hollywood. He was 84.

Taylor was a US TV and comedy club regular for more than six decades. He got his big break after being invited to appear on The Ed Sullivan Show. One of Taylor’s trademarks was pretending to cry whilst pleading with the audience to laugh, and Sullivan named him the “crying comedian.”

Countless further appearances followed on TV, including The Jackie Gleason Show, movies such as Wayne’s World 2, and on Jackass in the mid-90s.

Her death shocked Britain and reawakened memories of the sectarian troubles that have plagued Northern Ireland for decades. The New IRA admitted one of its members was responsible for the crime.

In the wake of her death, a letter she wrote to her 14-year-old self, in which she counseled that being gay would turn out to be OK, went viral.

Miriam Rivera, heralded by some as “the world’s first transgender reality TV star,” died at her home, aged 38, in Hermosillo, Mexico in February. Rivera shot to attention in the UK’s 2004 dating reality series, There’s Something About Miriam, and also appeared on Big Brother Australia.

Although her death was ruled to be suicide, those close to Rivera – including her New York-based husband – suspect she may have been murdered.

Walter Mercado was probably the best-known astrologer in the whole of Latin America. Although he never publicly came out, the Puerto Rican’s camp and flamboyant persona endeared him to millions – including many LGBTQ people. His televised horoscopes were broadcast across the Spanish-speaking world.

He died, aged 88, following a short illness, in San Juan on November 2.

A Navy veteran, political trailblazer and HIV/AIDS activist, Richard Rhodes died aged 81 in late July. Born in Tampa, Florida, he made Atlanta, Georgia, his home from 1971 onwards. Among his achievements, he was one of the first openly gay men to run for the Georgia House of Representatives, the first openly gay male delegate to the Democratic National Convention from Georgia and the first openly gay chair of the DeKalb Democratic Party. He was a founding member of SAGE Atlanta and Atlanta Prime Timers.

Gay entrepreneur Brandon Truaxe was the founder of the $300 million+ skincare company Deciem. He died, aged 40, in January, following a fall from the 26th floor of a condominium building in Toronto, Canada. Friends and colleagues reported that he had been acting erratically for several months, leading to him being ousted as the head of the company he founded.

Brandon, our founder and friend. You touched our hearts, inspired our minds and made us believe that anything is possible. Thank you for every laugh, every learning and every moment of your genius. Whilst we can’t imagine a world without you, we promise to take care of each other and will work hard to continue your vision. May you finally be at peace. Love, (forever) your DECIEM ?

Trans singer Jackie Shane died in February at the age of 78. Shane was born in Nashville, TN, but moved to Canada in the 1960s, where she briefly blazed a trail on the R’n’B circuit and had a hit with the song “Any Other Way” in 1967.

She disappeared into obscurity in 1971 and was not publicly heard from again until a retrospective collection of music was released in 2018 and picked up a Grammy nomination. Back living in Nashville, she came forward to do limited media interviews about her life and music.

Transgender activist Barbra ‘Babs’ Casbar Siperstein died on February 3. She was 76. Siperstein came out as trans in the late 1980s. She made history in 2009 when she became the first openly transgender person to be elected to the Democratic National Committee. She was promoted to the executive committee in 2011 and served until 2017.

Just days before her death, the Babs Siperstein Law went into effect in New Jersey. The law allows transgender, non-binary, and other gender-nonconforming people to request a change on their birth certificate from a registrar.

New Yorker Brian Butterick, also known as the drag queen Hattie Hathaway, died at the age of 62 in late January. Butterick was a well-known figure on NYC’s club scene. Beyond making a name for himself as a drag queen, Butterick was also a musician and performer, poet, and club runner. He worked for a while as creative director of Pyramid, as well as stints at Mudd Club, Mother and co-producer of Jackie 60 in the 90s.

Harris Wofford was a noted US attorney, civil rights activist, and Democratic Party politician who represented Pennsylvania in the United States Senate from 1991 to 1995. He married his wife, Clare, in 1948, and had three children. They were together until her death in 1996. At the time, Wofford said he never expected to fall in love again, but in 2001 he met interior designer Matthew Charlton, 50 years his junior. He married Charlton in 2016, at the age of 90. Wofford died January 21, 2019.

One of Haiti’s most prominent LGBTIQ activists, Jeudy Charlot, was found dead at his home in Pétion-Ville outside of the capital of Port-au-Prince on the morning of Monday, November 25th. He was 34. Jeudy rose to prominence as an LGBTQ rights advocate in 2009 when he founded Kouraj, a social group for queer people to meet and congregate together.

The organization evolved to take on a more campaigning role. In the months leading up to his death, friends and family had tried to persuade Charlot to flee Haiti for his safety.

Lesbian Pulitzer Prize-winning poet Mary Oliver died January 17, at her home in Hobe Sound, Florida, at the age of 83, following a battle with lymphoma. The beloved American poet was known for her odes to nature and wildlife. In 1984, she won a Pulitzer Prize for her poetry collection, American Primitive, and a National Book award in 1992 for New and Selected Poems. In 2007, The New York Times praised her as ‘far and away, this country’s best-selling poet’.

Andy Vélez, died May 14, 2019, aged 80, following complications associated with a fall in his Greenwich Village home. Vélez became involved with ACT UP soon after its launch in 1987 and remained a committed HIV activist throughout his life, also helping raise awareness of challenges facing Latinx communities and becoming involved with the Rise and Resist movement. 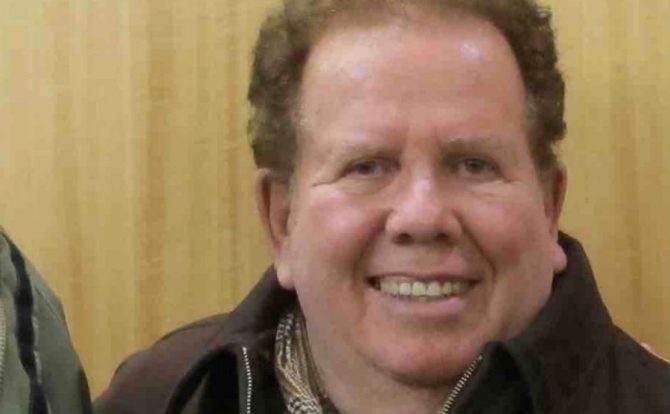 He was also a founding member of Queer Nation in New York City in 1990. Besides his activism, he wrote extensively about the theatre for a number of media outlets and taught courses in musical theater at the New School.

British theatre director and playwright Philip Osment died May 24, aged 66. Osment was a member of the pioneering queer theatre group Gay Sweatshop in the late 70s and 80s. He found acclaim with his play This Island’s Mine in 1988, described by The Guardian as “elegiac plea for acceptance of those at the fringes of mainstream society.” He went on to write and direct many other productions, including his award-winning Little Violet and the Angel (2001).

Acclaimed cartoonist Howard Cruse died November 26, aged 75, from complications relating to lymphoma. He was best known for his 1995 graphic novel, Stuck Rubber Baby, which explored his interior struggles as a closeted gay man during the civil rights era of the 1960s.

In the 1980s, he was founding editor of Gay Comix, which showcased the work of many underground lesbian and gay cartoonists. He also produced the comic strip, ‘Wendel’, which ran in the Advocate for much of that decade.

Drag queen Carmella Marcella Garcia was the creation of performer, George Timothy Reed, who passed October 15, 2019, in Bowling Green, Kentucky, aged 57, following a fight against cancer. He created Carmella, “The Grand Ole Gal of the South”, in the mid-80s and became a well-known figure in Nashville and further afield, with regular appearances in the bars of Provincetown and Florida. He also had great success as a pageant coach.

RIP legend. Thanks for all the laughs and love

Kenyan author and LGBTI rights activist Binyavanga Wainaina died May 21, at the age of 48. Wainaina worked for several years as a freelance food and travel writer. However, a satirical essay he wrote in 2012, How To Write About Africa, brought him to wide attention and won awards. It led to him writing more political work, leading to him being named by Time magazine as one of its annual Most Influential People in 2014.

He revealed himself to be HIV positive on World AIDS Day in 2016 and also announced plans to marry his long-term partner – news that made headlines in Kenya, where homosexuality remains criminalized.

Santiago Carvajal, 32, was a television presenter in Honduras. The trans broadcaster hosted La Galaxia de Santi, a magazine show on a local television channel. She was gunned down in the street and died July, 6. Friends say she had been subjected to death threats in the days preceding her death. Anti-trans hate crime is common in Honduras, and Carvajal was one of several trans women murdered in July alone.

Grammy-winning songwriter Allee Willis died Christmas Eve, aged 72, of a heart attack. She was best known for co-writing the Earth Wind and Fire songs, “September” and “Boogie Wonderland”, and the theme song to Friends, “I’ll Be There For You”, for The Rembrandts, among many other hits. She also wrote for shows, including the score for the musical of The Color Purple. Her partner, Prudence Fenton, announced Willis’ death via Instagram.

Spiritual philosopher Ram Dass died December 22 in Hawaii. He was 88. Born Richard Alpert, he was a clinical psychologist but a trip to India, and experimentation with LSD in the late 60s, set his life on a different path. He published several motivational and inspiring books, including The Only Dance There Is, and How Can I Help? Compassion in Action. A stroke in 1997 left him disabled, but he continued his work, saying his health challenges only led him to look even further inward into the spiritual heart of life.

Actress Helen Hunt was among those to mourn his passing. She posted a photo of herself to Instagram with one of his quotes on the subject of death.

“Dying is the most important thing you do in your life. It’s the great frontier for every one of us. And loving is the art of living as a preparation for dying. Allowing ourselves to dissolve into the ocean of love is not just about leaving this body; it is also the route to Oneness and unity with our own inner being, the souls, while we are still here. If you know how to live and to love, you know how to die.”