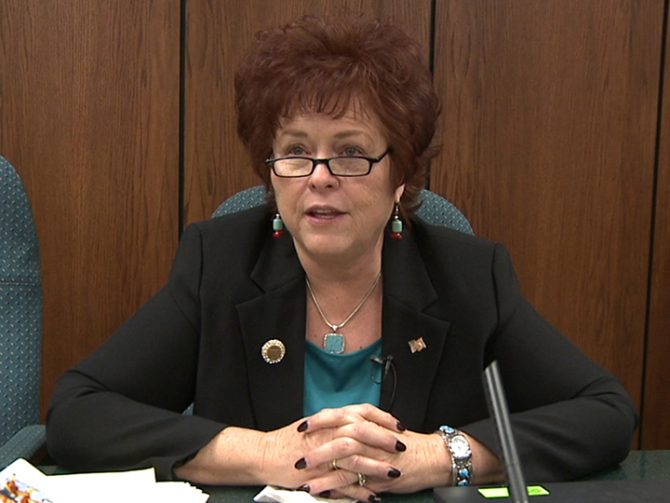 24 hours after causing a national uproar, that antigay Arizona lawmaker who wants to outlaw the word “homosexuality” is backing down, but she wants everyone to know that they’ve “misinterpreted” her intentions.

Earlier this week, State Senator Sylvia Allen, a Republican from the town of Snowflake, proposed a bill that would scrub the word “homosexuality” from all teaching materials used by schools.

Many believe that Allen, who is a vocal opponent of same-sex marriage and anti-discrimination laws protecting LGBTQ people, was attempting to undo the 2019 repeal of the state’s “no promo homo” law, a decades-old law that forbid educators from “promoting homosexual lifestyles.”

Arizona School Superintendent Kathy Hoffman said she was “appalled” by Allen’s proposed bill, telling a local media outlet that it “appears to undo the progress we have made as a state” and “could put the state at risk of another lawsuit.”

But after Queerty and several other national media outlets covered the story, Allen decided to quit playing word police. In a statement issued this morning, she says that, on second thought, the word “homosexuality” can stay.

“Several news outlets have reported that my bill to provide parents more access and information on sexual education courses also prohibits the inclusion of homosexuality as part of any chosen curricula,” she says. “They are misinterpreting the language. That was absolutely not my intention.”

Except that the bill did attempt to prohibit the inclusion of homosexuality in teaching materials.

Allen continues, “I regret that it has diverted attention from the main goal of the bill, which is to assist parents with more access and transparency, so that they could make informed decisions about the health and welfare of their children.”

“I will post an amendment today that removes the provision that has raised concerns,” she says. “With this clarification, I aim to return the conversation on this bill back to my original intent–to provide meaningful opportunities for parents to engage and be contributory on this very important issue.”

This isn’t the first time Allen, who believes the earth is approximately 6,000 years old, has come under criticism for pushing harebrained agendas.

In 2015, she suggested there be a law forcing people to go to church to help facilitate America’s “moral rebirth.” And in July 2019, she warned white Republicans that if they don’t reproduce faster, “we’re going to look like South American countries very quickly.”