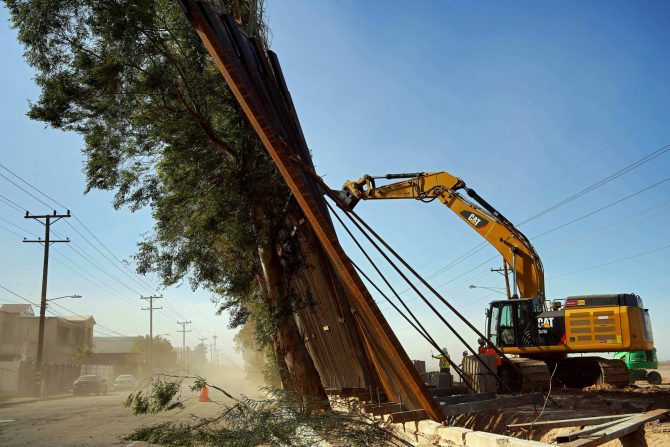 Perhaps you’ve heard that a portion of Donald Trump’s border wall collapsed yesterday after it was unable to withstand extreme wind gusts… of 37 MPH.

WATCH: A part of the border wall between Calexico, CA and Mexicali, Mexico tipped over into Mexico on Wednesday afternoon, according to Mexicali police. Trees next to the wall have kept it from falling over entirely. No injuries or damages have been reported so far. pic.twitter.com/PVl4s8VS00

The collapse happened in Calexico, California shortly after Trump held a rally in New Jersey where he lied about how “beautiful” and “powerful” his new wall was.

“We are now building that beautiful wall,” Trump said. “This powerful border wall is going up at record speed, and we just reached over 100 miles of wall. And next year we’ll be over 400 miles. And shortly thereafter it will be complete.”

President Trump: “This powerful border wall is going up at record speed.” pic.twitter.com/Cwl14K2yQz

And now, the responses…

Trump is like his Border Wall: supported mostly by delusional fantasies, far too easy to cross, and likely to buckle and crumble in the face of sustained pressure.

God, if you’re listening, give us a sign https://t.co/F8YrUuVCtx

Parts of trump’s border wall fell over from the WIND. That’s just how the cookie crumbles pic.twitter.com/thJrbRp3G4

I want my money backhttps://t.co/FTucfnuZEg

A piece of the border wall toppled over on Mexican side. I guess Mexicans wanted their property back. They paid for it, after all. https://t.co/odNEt0Yb3d

I used to think the border wall was a Karen.

So when Trump said he “never understood wind,” we maybe shoulda listened, huh?

Even Ann Coulter, author of In Trump We Trust, isn’t pleased about this wall business:

Someone please remind us… Is this what winning looks like?