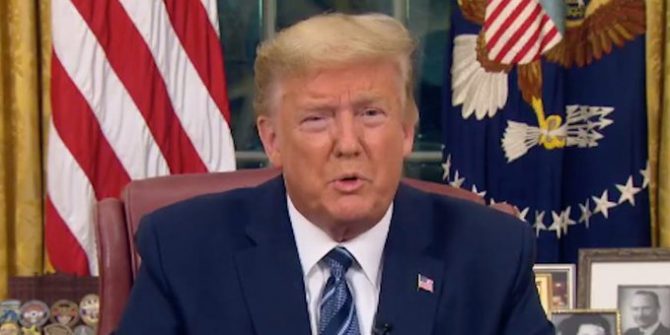 Ever the paragon of steady leadership, Donald Trump addressed the nation Wednesday night about the increasingly dangerous threat that the coronavirus pandemic presents.

Just before his video feed went live, however, he unknowingly broadcast this inspiring audio:

Could any utterance better encapsulate the Trump presidency?

The President of the United States continued:

“I got a pen mark. Anybody have any wipe, any white stuff?”

And if that’s not enough to ease your anxieties, after the address was over, Trump’s team let him know “we’re clear” while CSPAN was still broadcasting.

An exacerbated “…OK” from the president clearly means he’s got this problem under control.

That moment C-SPAN didn’t realize they were broadcasting still…. pic.twitter.com/eoO2pgzCQt

Meanwhile, some of the most well-respected LGBTQ advocacy groups in the US – including HRC and GLAAD – have signed an open letter to remind “all parties handling COVID-19 surveillance, response, treatment, and media coverage that LGBTQ+ communities are among those who are particularly vulnerable to the negative health effects of this virus.”