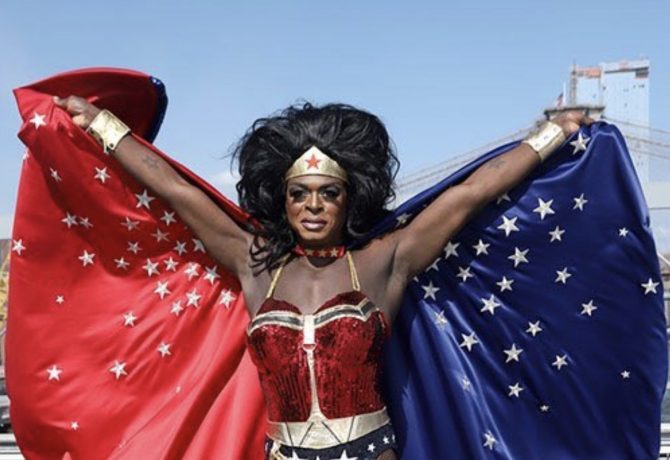 According to credible reports on social media, Nashom Wooden, aka Mona Foot, has died at the age of 50.

Several people also claim the cause of death was COVID-19.

Project Runway designer Geoffrey Mac was a good friend of Wooden’s. Mac uploaded a video to Instagram to share the sad news.

“I just want to make sure that everyone out there is healthy and takes care of each other,” Mac said. “The virus is really real and I’m just so sorry.”

“I could see the power of it. No one saw that coming. To be not only a superhero, to be black and a man. I didn’t realize at the time I was feminine. The message was so powerful, performing ’I’m Every Woman’ as Wonder Woman,” Wooden told Michael Musto in 2017.

Over the years, Wooden slowly stepped back from their drag persona, before hanging up the heels for good.

In the late ’90s, Wooden became a singer in the dance-pop trio the Ones, appeared alongside Robert De Niro in the movie Flawless, and worked at the NYC nightclub The Cock.

Friends have been sharing their grief and love:

she was a legend & a true queen RIP

This virus is real. A very good friend of mine Nashom (Mona Foot a NYC legend) just passed away from complications of this virus. I’m shocked and heartbroken. please stay home. ?

This virus has taken our dear Nashom Wooden..aka Mona Foot. Part of our New York nightlife family. A beautiful gorgeous creature, an amazing artist and a friend for 25+ years. When I think of you I will always see that beautiful smile. We love you Nashom… always and forever. pic.twitter.com/TnwEWiJh45

My heart is broken right now. I can’t believe this ? we lost Nashom Wooden (aka Mona Foot) @thenashom9000 to this fucking atrocity of a virus! Ive known Nashom since I was a teenager. I adored & admired the iconic Mona Foot. I got lucky enough to get to know Nashom and become friends as an adult. We’re both family members in the House of Feilds. I love you & will miss you my friend/my sister ??rest peacefully. You’re ABSOLUTELY FLAWLESS! PLEASE listen to the reports, STAY HOME, wash your hands, keep yourself safe! Love one another!

RIP MY MOTHER ?? @thenashom9000 aka Mona Foot @ Singer of @the_ones Just passed on from the COVID-19 experiencing symptoms went to the hospital and got turned away because he is not sick ? enough and then shortly after passed on !! please please stay inside and protect yourself this pandemic coronavirus Virus we have just lost a legendary icon this is awful ???? https://youtu.be/ijmlffXW9sw go 2 my you tube and warch her Space Cunt ??