Daily Dose: A team of hot peaches to sweeten the day 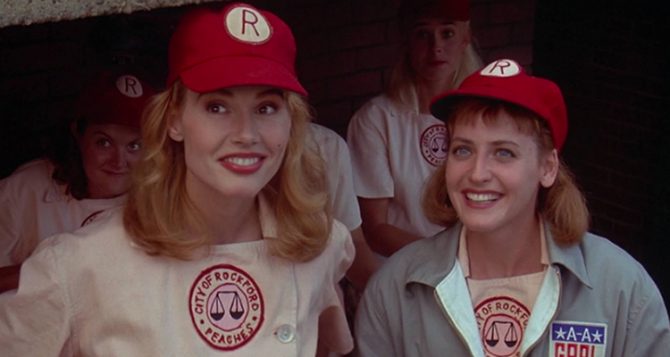 The Sporty: A League of their Own

What can we say about this enduring feel-good comedy from 1992? Geena Davis and out-lesbian Lori Petty star as a pair of sisters drafted into an all-female baseball team, the Rockford Peaches, at the height of World War II. Tom Hanks plays their alcoholic coach, a man convinced that women don’t belong in sports…until he begins to see the incredible talent within his team. Madonna, Rosie O’Donnell, Bill Pullman and Jon Lovitz also star under the playful direction of Penny Marshall. Though not especially LGBTQ in subject, the queer interest of the film is undeniable given the prominent gay or bisexual cast members and ideas of gender subversion at the heart of the plot. Davis and Petty both give two of their best performances, as does Madonna, who damn near steals the movie as the horny center fieldsman, Mae. Comedy doesn’t get much more satisfying. Neither does cinematic comfort food.