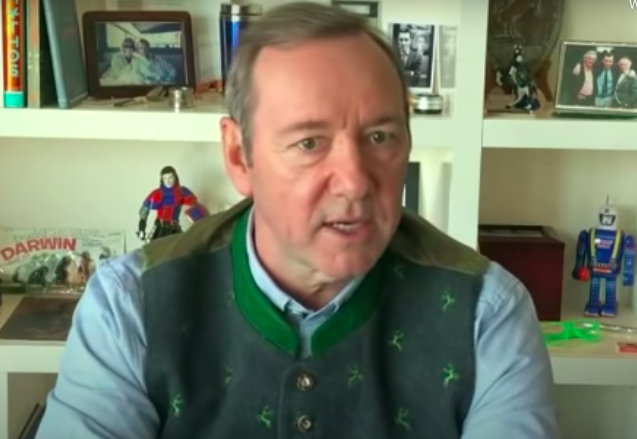 Kevin Spacey has broken his silence for first time about life after his epic #MeToo scandal and, let’s just say, it might’ve been better if he hadn’t.

The actor spoke for roughly 10 minutes at a German business conference called Bits & Pretzels in a video streamed from his home, during which he compared the downfall of his career to… the coronavirus pandemic?

“I can relate to what it feels like to have your world suddenly stop,” he said.

The 60-year-old continued, “I don’t think it will come as a surprise for anyone that my world completely changed in the fall of 2017. My job, my relationships, and my standing in my own industry were gone in just a matter of hours.”

As you may recall, in 2017, actor Anthony Rapp came forward to allege that Spacey once tried to have sex with him at a party when he was only 14. After that, over a dozen other men came out with their own stories about Spacey.

Spacey denied everything, though he did settle one sexual assault lawsuit with an unidentified massage therapist out of court. (The massage therapist later died after posting a cryptic message to social media saying he feared for his safety.)

In his speech, Spacey explained how he felt after losing everything, saying it’s not dissimilar to how many people are feeling now that coronavirus has caused them to lose their jobs.

“While we may have found ourselves in similar situations albeit for very different reasons, I still feel that some of the emotional struggles are very much the same,” he said.

He added that he has “empathy for what it feels like to suddenly be told that you can’t go back to work, or that you might lose your job, and it’s a situation you have absolutely no control over.”

Spacey did have one piece of somewhat useful advice when he warned people against letting themselves be defined by their work, since it can all be taken away in an instant, and then what do you have left?

“I was so busy defining myself by what I did or what I was trying to do that when it stopped, I had no idea what to do next, because all I ever knew was how to act,” he said.

“When my career came to a grinding, screeching halt, when I was faced with the uncertainty that I might never be hired as an actor again, I had asked myself a question I’d never asked myself before, which is, if I can’t act, who am I?”

Watch the full speech below. Or don’t.