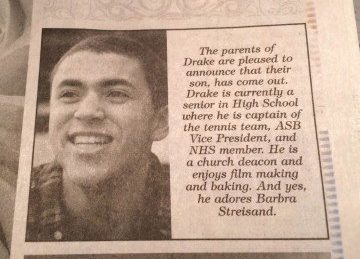 This year marks the 50th anniversary since the first pride parade following the 1969 riot at New York City’s Stonewall Inn. Since we’re unable to gather in person this June, Queerty is celebrating pride season with our “Moments of Pride” series. We’re looking back through our archives at stories that have moved or inspired us, made us laugh, opened our hearts and minds, or that simply make us proud. Throughout the spring and into summer, we’ll be commenting on these subjects through today’s lens to show just how far we have come in a half-century. Happy pride!

In 2016, Joan Wilson placed an ad in the Sunday edition of the Houston Chronicle announcing that her teenage son, Drake, had come out as gay and she couldn’t be prouder of him.

“The parents of Drake are pleased to announce that their son has come out,” the ad read. It then listed several of the high school senior’s achievements, including that he was a church deacon, served as student body vice president at his school, enjoyed filmmaking, baking, “and yes, he adores Barbra Streisand.”

But here’s the thing: Drake and his family actually lived in Washington state. They chose to place the ad in Houston’s largest daily newspaper in response to the repeal of the city’s Equal Rights Ordinance, which prohibited discrimination based on sexual orientation and gender identity.

“I couldn’t think of a better place than Houston, out of the entire country, where they needed to hear my message of pride,” Joan said. “My announcement was my way of humanizing the issue.”