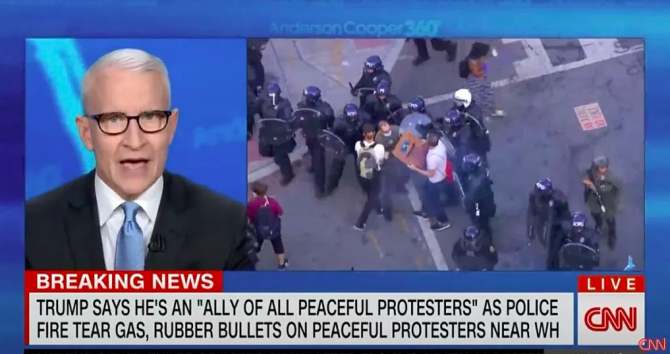 Anderson Cooper was completely taken aback last night after hearing Donald Trump just had peaceful protestors teargassed outside the White House so he could walk across the street, along with Jared and Ivanka, for a photo op in front of a vacant church.

“Oh my God,” Anderson said as reporter Kaitlan Collins reported the reason for the teargassing. “Wow. We are in trouble.”

Trump purportedly took the photo to show Americans that he’s not cowering inside bunker like everyone is claiming. (For the record: Trump did, indeed, hide in the White House bunker over the weekend as protestors gathered outside the executive mansion.)

Related: The Donald Trump “Bunker Boy” memes are in and OMG he’s not gonna like this

“He was hiding in a bunker and embarrassed that people know that,” Cooper said. “So what does he have to do? He has to stick police on peaceful protesters so he can make a big show of being the little big man walking to a closed down church.”

“We are in trouble.” –@AndersonCooper pic.twitter.com/RmMmOKCfXy

Later in the broadcast, Cooper ripped into Trump, calling him a failed leader, outrageous, and dangerous.

“We are witnessing a failure of presidential leadership at a time when this country, when we the people, need it more than ever, perhaps in our lifetime,” he said.

“So, a lot to unpack there, the president threatening to use unprecedented military force on U.S. soil while offering a preview of it on the streets of Washington. The President wanted peaceful protesters–the kind he said he just supports–he wanted them out of the way for his photo op. It was simultaneously outrageous and dangerous.”

“What the president doesn’t seem to know or care is that the vast majority of those protesting, they too are calling for law and order,” Anderson continued. “People have waited for days for this wannabe wartime president to say something. And this is what he says. And that is what he does.”

“Of course violence is no answer, but people protesting deserve answers. And they haven’t gotten them no matter how many black men had been murdered, lynched in prison, mistreated, redlined, blackballed from jobs. We all know it. People protesting in the streets — they know it and they’re tired of it. And we should be too.”