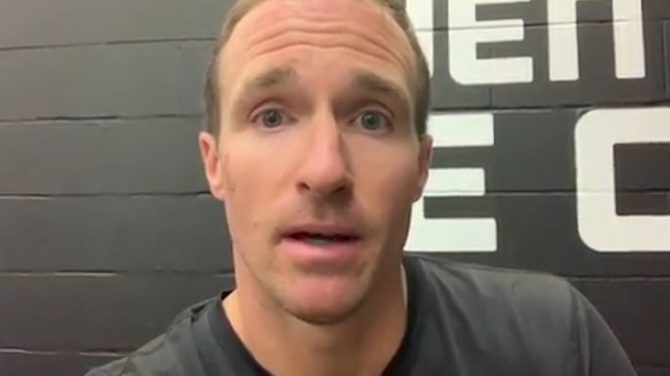 NFL quarterback Drew Brees just offered a textbook example of why white people need to talk less and listen more when it comes to the demonstrations currently taking place across the country in response to George Floyd‘s murder at the hands of Minneapolis police.

In an interview with Yahoo Finance today, Brees, who has a long partnership with the antigay hate group Focus on the Family, said he will “never agree with anybody disrespecting the flag of the United States of America” when asked about NFL players peacefully protesting police brutality by taking a knee.

Related: Drew Brees to people criticizing his work with antigay hate group: “Shame on you!”

“I love and respect my teammates and I stand right there with them in regards to fighting for racial equality and justice,” Brees rambled on. “I also stand with my grandfathers who risked their lives for this country and countless other military men and women who do it on a daily basis.”

Highlight: @readdanwrite asks @drewbrees what the star NFL quarterback thinks about “players kneeling again when the NFL season starts.”@drewbrees: “I will never agree with anybody disrespecting the flag of the United States of America or our country.”

These were his first public remarks since Floyd’s murder.

A backlash ensued almost immediately. One of the strongest rebukes came from NBA superstar LeBron James, who (once again) informed Brees that kneeling during the national anthem has “nothing to do with the disrespect of [the United States flag] and our soldiers.”

men who fought as well for this country. I asked him question about it and thank him all the time for his commitement. He never found Kap peaceful protest offensive because he and I both know what’s right is right and what’s wrong is wrong! God bless you. ?????

But James wasn’t the only one repulsed by Brees’ racially-coded comments.

Here’s what other people are saying…

Drew Brees didn’t get the message. But at least he’s proving my point that for some folks, there is *no* acceptable way for Black people to demand their full rights as American citizens & equal protection under the law. https://t.co/WSREIBJlwF

How can anyone watch George Floyd get murdered and their first response when asked about it is ResPEcC tHe fLAg.

This is a disgrace! To speak about your grandfathers as if there weren’t black men fighting next to them.Those men later returned to a country that hated them. Don’t avoid the issue and try to make it about a flag or the military. Fight like your grandfathers for whats right! https://t.co/qag3Igic3V

.@drewbrees the reason my children have to live in a world that won’t empathize with their pain is because people like you are raising your children to perpetuate the cycle. Drew, you are the problem.

It’s really up to people to see what they want. If Drew Brees, who’s in an NFL locker room full of black men and lives in a city with a black population of 60%, doesn’t have the empathy to understand different views of the American flag, he’s intentionally closing his eyes.

If you’re still talking about players “disrespecting the flag” by kneeling during the national anthem clearly you’re not ready for these conversations. Call a time out and come back later.

Drew Brees, “I” fought for this country for 6 years in the Air Force. I fought for someone like Kap to use his RIGHT to be able to peacefully protest injustice. IT’S NOT DISRESPECTING THE FLAG. YOU are disrespecting the cause. This is the wrong audible for you to call! https://t.co/yilzLqkgJf

Drew Brees getting cancelled?!! Turn that shit up

They make friends with and act like they share common cause with those black friends, but when the rubber meets the road, they’re “more devoted to order than justice” as MLK wrote about. pic.twitter.com/lAVT957U3G

Welp! This is all I need to see! #DrewBrees is dead to me! pic.twitter.com/lnHH0gvERb

As we mentioned earlier, this isn’t the first time Brees has demonstrated that he’s on the wrong side of history.

Last fall, it was revealed he had been quietly partnering with the antigay hate group Focus on the Family for almost ten years, appearing on its radio program, being profiled on its official blog, and filming a video to promote “Bring Your Bible To School Day,” which was designed to combat National Coming Out Day.

Hey, Ellen, you wanna come get your boy?