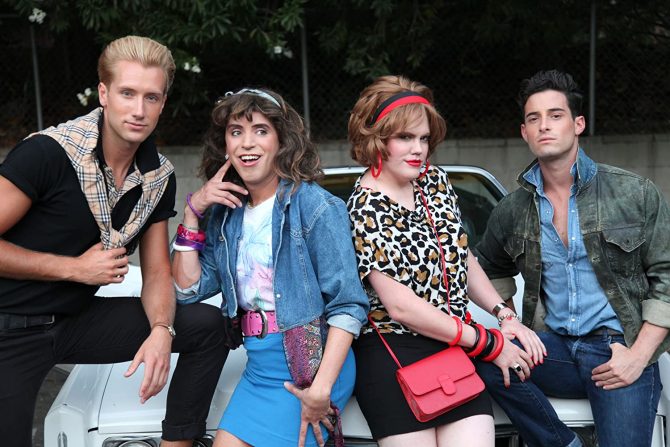 Who would have thought that casting two men in their 30s as teen girls would make for a delightful high school-themed comedy? For that reason, First Period took us off guard. The movie takes the John Waters approach to John Hughes, confronting the glow of high school nostalgia with a big gay chainsaw. Writer Brandon Alexander III and producer Dudley Beene star as Cassie and Maggie, two high school cast outs determined to win a school talent contest. Working against them: their own awkwardness, and a stuck-up blond named Heather (Lauren Rose Lewis), who wants to see Cassie & Maggie humiliated. Pranks, pool parties and awkward dates ensue as Cassie & Maggie try to ascend the social ladder.

What keeps First Period from derailing–and indeed, what keeps it from becoming a grating exercise in camp–are the affecting performances by Beene and Alexander. Though in drag, they never approach their characters with sarcasm; rather, they find a vulnerability in their roles. A talented supporting cast also helps, with hilarious turns by Jack Plotnick, Cassandra Peterson, Diane Salinger, Deven Green and Judy Tenuta. Strange how a movie this silly can also manage to be so affecting.