DUP politician – surprise, surprise – thinks treating trans and non-binary people with dignity is against the Bible

British broadcaster Channel 4 is set to make history by showing Nigel Farage, wait, sorry, we mean an erect penis on terrestrial television for the first time. In a show that will no doubt have its ups and downs, the upcoming documentary Me & My Penis will explore the changing landscape of how men think ……

CLIP OF THE DAY. Sweaty Donald Trump signs autographs and tells local officials to sell them on eBay during a disaster. “President Trump visited Lake Charles, Louisiana recently, where Hurricane Laura made landfall. After meeting with emergency officials, he said, ‘Come here fellas, I want a little power.’ He then sat at a table and started signing pieces of paper, offering them to Lake Charles officials.”

HOW HE THINKS. Trump thought he could “settle” Mueller investigation:  “At one point, as the investigation seemed to be intensifying,” Schmidt writes, Trump told White House counsel Don McGahn “that there was nothing to worry about because if it was zeroing in on him, he would simply settle with Mueller. He would settle the case, as if he were negotiating terms in a lawsuit.”

ADMISSIONS SCANDAL. UPenn professor renews request to investigate Trump’s admission to the school after his sister reveals he had someone take SATs. “The provost, Wendell E. Pritchett, replied to Orts on July 20 that ‘we certainly share your concerns about these allegations and the integrity of our admissions process. However, as you suggest in your message, we have determined that this situation occurred too far in the past to make a useful or probative factual inquiry possible. If new evidence surfaces to substantiate the claim in the future, we will continue to be open to investigating it.’”

PHANTOM WAP. Andrew Lloyd Webber does a WAP remix on his TikTok account. Yes, you read that correctly.

‘OFF THE CHARTS’ Michael Moore warns of enthusiasm in Trump’s base.

Happy what would be Notting Hill Carnival my beloved London

ANDREW SULLIVAN. NYT’s Ben Smith says he still reads him, but can’t defend him: “He was a star in his 20s, when he ran The New Republic, so celebrated that he posed for Annie Leibovitz in a Gap ad in a white T-shirt and a memorably coy expression. He was a master of provocations there that included one that defined him, arguing long before it was part of mainstream political debate that same-sex couples should have the right to marry. But he also published a cover story, an excerpt from ‘The Bell Curve,’ that claimed to show a link between race and I.Q., a decision that has increasingly consumed his legacy.”

RUSSIA. DOJ never fully investigated Trump’s ties: “The Justice Department secretly took steps in 2017 to narrow the investigation into Russian election interference and any links to the Trump campaign, according to former law enforcement officials, keeping investigators from completing an examination of President Trump’s decades-long personal and business ties to Russia.”

ITALY. Older gay people, in pictures. “Photographer Melissa Ianniello’s long-term project investigates the double taboos of homosexuality and old age in Italy. The subjects of her intimate portraits are a group of gay men and lesbians between 60 and 90 years old, captured as couples or alone in their own homes”

#Repost from @premiovoglino with @regram.app Hey guys! For this week I'm taking over the @premiovoglino Instagram account! I'm sharing some pictures from my ongoing "Wish it was a coming out" and talking about the project ! Wanna follow me there?

$200 AIRLINE TICKET-CHANGE FEES. United just got rid of them: “United Airlines on Sunday said that it will permanently scrap fees to change domestic flights, a big bet that more flexible policies will win over much-needed customers as the pain from the coronavirus pandemic’s impact on air travel continue to mount.”

LOYALTY PLEDGE. Trump demanded loyalty pledge from FBI director John Kelly, didn’t get it: “Schmidt reports that ‘throughout Kelly’s time working directly with Trump, Kelly was repeatedly struck by how Trump failed to understand how those who worked for him — like Kelly and other top former generals — had interest in being loyal not to him, but to the institutions of American democracy.’”

MUSIC VIDEOS OF THE DAY. The Kinsey Sicks “Tomorrow” and “Let It Go”. “I want every person who loves rugby to have the chance to feel the way I did.”

WATCH: Karen’s dentures keep falling out as she screams racist chants at a Trump rally 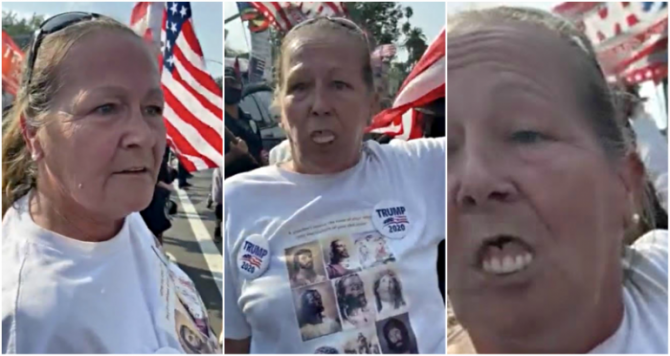 A California woman couldn’t keep her dentures in her mouth while she shouted racist and xenophobic insults at an Asian-American woman during a recent Trump rally in Beverly Hills.

The woman, who goes by the name Carla Canada, was caught on video wearing Trump insignia (but no mask, of course) and shouting at a counter-protester who was holding a sign that read “Trump/Pence out now!”

“You’re in America!” Canada yelled at the woman. “Go back to where your ancestors came! F*ck communism!”

When someone asked what her name was, Canada struggled to identify herself because her dentures keep coming loose. Evidently, in addition to forgetting her mask, she also forgot her Poligrip.

Sunday Funday Is Reading Through 120 Black-Owned Bookstores(!!) … and You Can, Too! 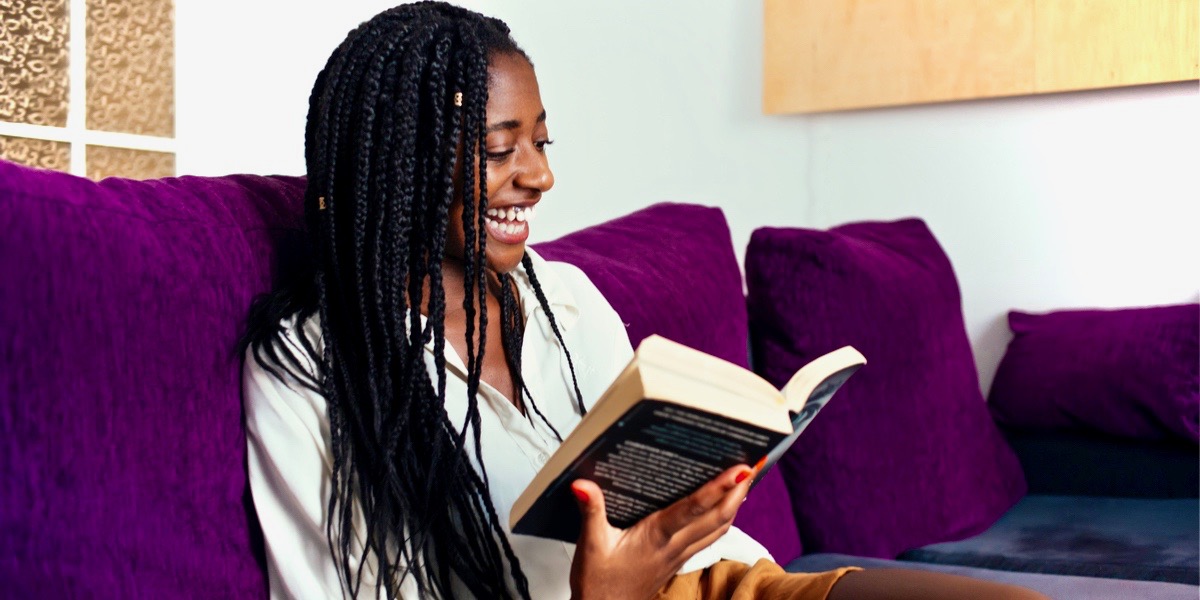 The world IS on fire, but there is good news! Like, Marsha P. Johnson monuments, live kitten cams, Black babies dressed in Black Panther costumes, J.Lo’s nonbinary nibling, and so much more ❤️

The post Sunday Funday Is Reading Through 120 Black-Owned Bookstores(!!) … and You Can, Too! appeared first on Autostraddle.

Bella Thorne claimed that her controversial OnlyFans account would serve as research for an upcoming film project with friend Sean Baker, but the director has now said that this isn’t true. Former Disney star Bella Thorne, who came out as pansexual last year, has been swamped in controversy during the last week over…

The Middle Ages conjure an image of darkness, stagnation and regressive attitudes – but a resurfaced queer medieval story has proved this is far from the full picture. A recently resurfaced tale from 12th century Ireland is forcing many people to re-evaluate their perception of the Middle Ages as being a time of stagnation… The man says the incident took place when he was a student at Liberty University, the far-right Christian school run by Falwell’s husband until this month.

One Dead After Caravan of Armed Trump Supporters Descends on Portland: VIDEOS

A caravan of armed Trump supporters gathered and drove into Portland, Oregon on Sunday night, spraying pepper spray, shooting paintballs, and inciting violence that led to at least one man’s death.

The Oregonian reports: “Portland police said the man was shot around 8:45 p.m. near Southwest Third Avenue and Alder Street. The agency did not say whether the incident was related to the demonstrations. A photo from the scene showed the man wearing a hat with a Patriot Prayer logo. The far-right group has been at the center of multiple Portland demonstrations that often culminate in violent clashes. … Various scuffles between pro-Trump demonstrators and counter-protesters had broken out in the hours since a vehicle rally in support of President Donald Trump, which began in near Clackamas Town Center, reached Portland. Organizers of the event encouraged demonstrators to come armed, but not carry their firearms openly.  The fatal shooting occurred after most of the Trump caravan had left downtown.”

Said Portland police in a statement: “Homicide detectives are aware of videos circulating on social media that show the shooting. It is important for detectives get a full and accurate picture of what happened before, during, and after the shooting. If anyone was a witness, has video, or has information about the homicide, they’re asked to contact the primary detectives. “

This tweet thread from NYT correspondent Mike Baker is a good summation of the events that took place:

The post One Dead After Caravan of Armed Trump Supporters Descends on Portland: VIDEOS appeared first on Towleroad Gay News.