This Halloween, isn’t it time we all channeled our inner goth chicks? 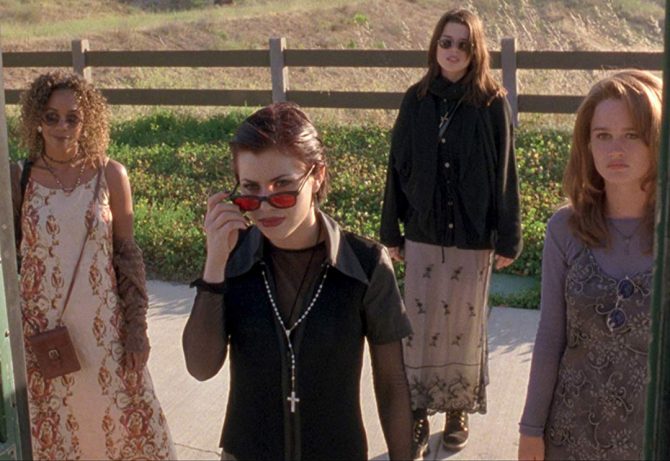 The Bewitching: The Craft

Before the sequel lands on screens, grab your black nail polish and lipstick. Light a candle and stream The Craft, the movie that made Hollywood sit up and take notice of goth culture…not to mention made scores of young women–and their gay besties–reach for their broomsticks.

Gay writer/director Andrew Flemming scored a major hit with The Craft back in 1996. The film stars Robin Tunney as Sarah, the prototypical “new girl” in a prestigious Los Angeles private school. Bullied by her classmates and taken advantage of by the school heartthrob (Skeet Ulrich), Sarah falls in with a group of sullen outcasts (Rachel True, Neve Campbell and Fairuza Balk) dubbed “the Bitches of Eastwick” by their fellow students. The four women begin practicing witchcraft and soon find extreme magic at their disposal, allowing them to take shrug off the school bullies, win the hearts of boys and do away with some embarrassing scars. For Balk’s Nancy, however, evening the scales isn’t enough. She wants revenge…

The Craft has a decidedly gay sensibility to it. The film presents the four women as intelligent and their femininity a source of power. The men in the story, meanwhile have an overt sexiness to them–something most straight directors wouldn’t have the sense or courage to do. Goth fashion has never looked so good, and the morose rock soundtrack puts us in the mood to get freaky. Take that as you will.

The Craft is just about as fun as a horror adventure gets. Fairuza Balk gives an amazing, underrated performance, and the film’s special effects hold up after more than 20 years. Wild, imaginative and wicked in every sense of the word, it should be required viewing ever October.