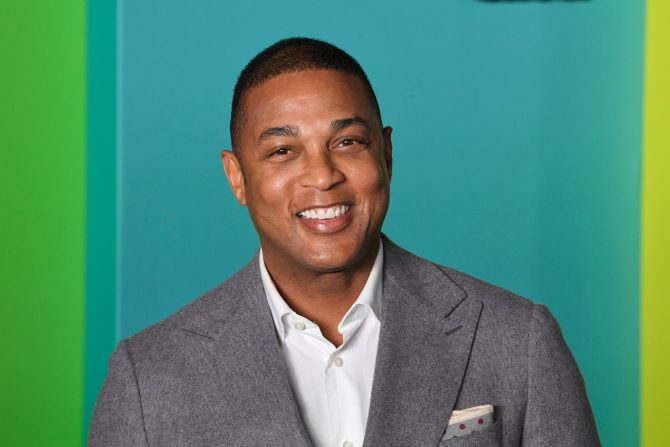 This profile is seventeen of Queerty’s 2020 Out For Good series, recognizing public figures who’ve had the courage to come out and make a difference in the past year, in celebration of National Coming Out Day on October 11.

Bio: A native of Baton Rouge, Don Lemon worked for local news affiliates in Birmingham and Philadelphia before joining NBC News — serving as a correspondent for Today and NBC Nightly News — and then anchoring NBC Chicago news broadcasts. Lemon joined CNN in 2006, and in 2014, he began his current job hosting CNN Tonight.

Lemon won an Edward R. Murrow Award in 2002 for his coverage of the D.C. area sniper, and in 2006, he won three regional Emmy Awards for his reporting in Chicago.

Coming out: Lemon came out as gay in his 2011 memoir, Transparent, a book he dedicated to Tyler Clementi, a gay college student who completed suicide the prior year after a roommate used a webcam to spy on him having sex.

“I don’t want there to be any more Tyler Clementis,” Lemon told PinkNews at the time. “When I was first approached to write a book I kept saying no because I thought I didn’t have anything to contribute. When I finally sat down to write I realized I did have a story: a book that would have helped me as a kid or as an adult. I decided to dedicate the book to Tyler and to others like him.”

He added: “If I hadn’t been asked to write a book I think I would have come out publicly anyway, sooner or later. I was already out in my personal life and in my professional life too with those I had a personal connection with. I just hadn’t said or written the words publicly.”

How He Made a Difference: When he came out, Lemon was one of the first openly gay Black men in broadcasting, and in 2016, he was one of three honorees at the inaugural Native Son Awards, a recognition of influential Black gay men in society.

While doing press for that event, Lemon even inspired journalist Gerren Keith Gaynor to come out to his mother. “I’ve always admired Don Lemon as a visible black gay man with his own prime-time show on CNN, if for nothing else than forging the way for a young black journalist like me,” Gaynor wrote in an article for The Root. “I never expected that he would be playing therapist with me on how to come out to my mother — but life is funny like that sometimes.”

In 2019, the editors here at Queerty included Lemon in our Pride50. “At great personal risk to himself (see: death threats), Lemon continues to push the boundaries of equal treatment for both LGBTQ people and African-Americans, and especially for the intersection of the two,” the editors wrote at the time.

“Being out both personally and professionally is liberating. I am a completely emancipated person. I am free. That’s a great place for people to strive to be. I think everyone should be out in all places.” – Don Lemon to Gerren Keith Gaynor