Biles has recently filmed a couple of short commercials for Uber Eats with Queer Eye’s Jonathan Van Ness. In them, they’re dressed in matching gym leotards and both ordering meals via Uber Eats. The tagline is: ‘Anything Simone Biles can do, Jonathan Van Ness can do … in his own, amazing way.’

Unsurprisingly, One Million Moms, which routinely gets upset about anything LGBTQ-related that might be seen by children, blew a gasket. It launched a petition last week to express its dismay to Uber Eats and encourage followers to use different food-delivery services.

In a statement, the group – an offshoot of the American Family Association – said, “Casting a cross-dresser in its ads screams liberal agenda and turns off potential Uber Eats customers … Shame on Uber Eats for attempting to brainwash viewers with an agenda instead of focusing on providing a helpful service, especially during a pandemic.

“Instead of making audiences lose their appetite by glamorizing a LGBTQ lifestyle, Uber Eats should focus on what it does and remain neutral on controversial issues.”

At the time of writing, the petition had gained significantly less than one million signatures. It had just over 7,200, to be precise.

“From tacos to talent, we like it spicy. JVN and Simone serve gymnastic prowess and self-confidence, qualities millions of moms everywhere can — and do — support.”

Related: Jonathan Van Ness has a message for Aaron Schock

Now, Biles has commented. Tweeting a link to the NBC story, she said, “The world we live in makes me sad, but I’d do x1000000 more commercials with you just to piss everyone off! The LGBTQIA will always have my support and feel welcome on my socials.” 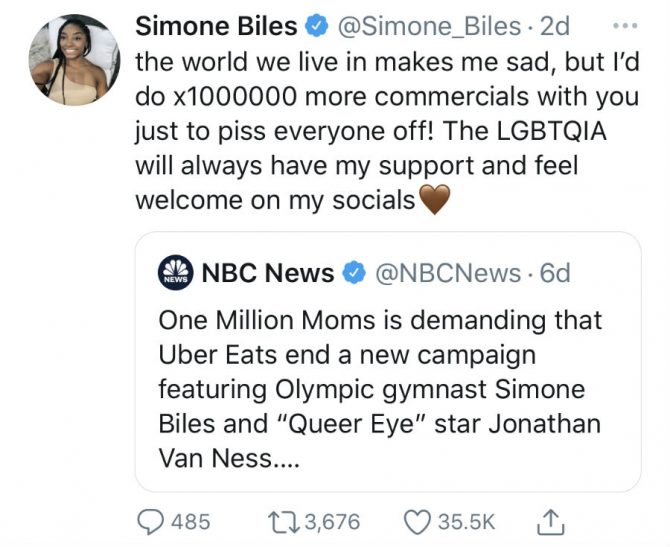 The tweet has been liked over 35,000 times and prompted plenty of comments.

I was fine until I saw this ad. Now I’m gay AND a gymnast at 44. My wife was shocked until she also saw this ad. She’s now my biggest competitive rival and has a wonderful new girlfriend. The agenda push here was strong.

I didn’t get the memo that our LGBTQI community had an agenda. Sounds fabulous though. Where do I sign up?@Simone_Biles You are amazing! Thank you for standing up for all! You are great role model for kids and adults alike! Much respect!