Eric Trump is absolutely losing it on Twitter, urges people to call a fake number to report fraud 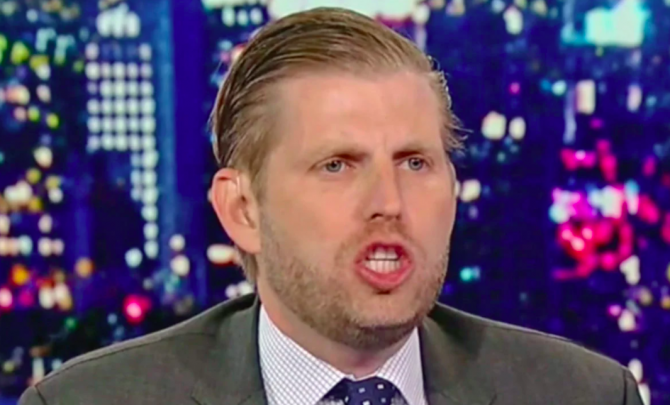 It’s becoming increasingly more obvious that Donald Trump has lost his bid for reelection. Though the official call has yet to be made, things aren’t looking promising for the flailing 45th president.

One person who appears to be taking the impending loss especially hard is his son, Eric. The 36-year-old has been firing off one insane tweet after another, calling the election a “sham,” alleging widespread “fraud,” accusing Democrats of “trying to cheat,” and lashing out at Republicans for not doing more to help.

Yesterday, he tweeted: “Where are Republicans! Have some backbone. Fight against this fraud. Our voters will never forget you if your sheep!”

Where are Republicans! Have some backbone. Fight against this fraud. Our voters will never forget you if your sheep! https://t.co/jLzOIJbrwV

Then earlier this morning, he shared a red, white, and blue graphic, urging people to call  888-503-3526 to report any suspected voter suppression, irregularities, or fraud.

But if you actually call the number, nobody answers. Instead, callers are treated to a long loop of some of Trump’s greatest 2016 campaign stump speeches.

“The only one who can stop this corrupt machine is you,” a robotic voice eventually says about 10 minutes in, following a long rant about Hillary Clinton’s emails.

After about 16 minutes, the voice comes back on the line to say, “I’m sorry, there’s been an internal error. You will be disconnected now. Goodbye.”

Then the call drops.

Eric’s graphic also includes a web address, which directs people to a “Vote Fraud Issue Report Form,” where they are asked to upload any photographic or video evidence of alleged fraud they have witnessed.

But the website doesn’t actually allow you to upload anything. If you try, you get an error message that reads, “File uploads have been disabled for this form.”

One thing is most definitely clear. The Trump campaign, which was always already on the brink, has finally descended into complete and utter chaos.

You might wanna make another bag of popcorn, folx, because we have a feeling this is gonna last a while.

Related: “Actual footage” of Melania fleeing the White House is blowing up on Twitter