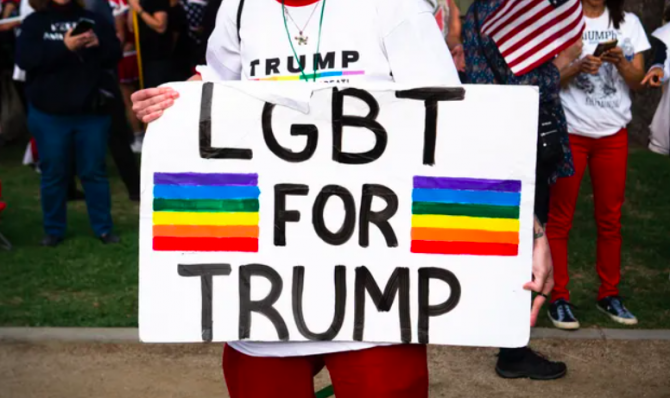 Well, we can all breathe a collective sigh of relief because Donald J. Trump has lost his reelection bid. Come Wednesday, January 20, 2021, our shared four-year nightmare will finally (finally!) be over.

Well, at least it will be for most of us.

For roughly 28% of LGBTQ voters, the nightmare is just beginning. That’s how many queer people cast their ballots for Trump, according to exit surveys conduced by Edison Research for the National Election Pool.

Needless to say, these folx are not taking Trump’s loss well…

The woke gay left are just the absolute worst bunch of miserable narcissistic imbeciles. Glad to never associate with them and the last few days have proved it. #MAGAGays #GaysForTrump #ConservativeGays.

The news media is trying to demoralize people with valid questions about this process by declaring Biden the winner.

And the next few weeks will be filled with legal challenges. Keep fighting.

Anyone, and I mean ANYONE from the #GOP house or senate that folds on @POTUS #DonaldTrump, I will screenshot your tweets and you WILL BE primaried!#ShotAcrossTheBow #gaysfortrump #WalkAway

The whole map is lit red, but no, Biden wins because he won like one small town in Long Island New York. SUSSPICCCCIOUSSSSS. #Trump2020 #GaysForTrump @realDonaldTrump

In the last four days since the election, every single swing state magically flipped from red to blue by margin of less than 30k votes.

#GaysForTrump
how do I delete pound sign?
HOW
HOW HELP

What irony. When CNN calls the election for Joe Biden you know it’s FAKE NEWS.

They (the woke gay left) expect us to give them our free will & intellectual independence and if we don’t, we are casted away as heretics and apostates who receive no mercy. They truly do act like Islam don’t they? Just without the killing. #MAGAGays #ConservativeGays https://t.co/1MOVcCwKp1

CNN has declared Biden the winner, but they are LYING

There are dozens of legal claims being litigated in court

There are razor-thin vote margins in multiple swing states

Hundreds of instances of voting fraud being investigated

WE WILL WIN IN THE COURTS!!

TRUMP FLAGS NEEDS TO GO UP!

@realDonaldTrump
As a gay man, I want to apologize to the President of the United States of America Donald Trump for how the LGBTQ community is behaving durring this election. Not all of us are like that. #GaysForTrump

It’s disappointing that so many in our community voted for the guy who has spent the past four years chipping away at our rights. We hope they have a change of heart one day.

Related: Four things that loser Donald Trump should do now that he’s been fired