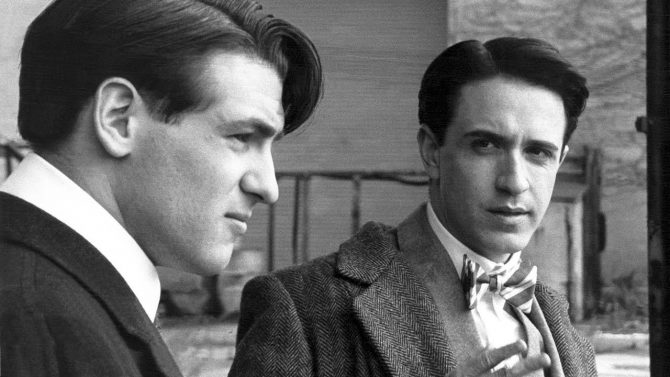 In short, teens Nathan Leopold and Richard Loeb became tabloid celebrities after they murdered 14-year-old Bobby Franks in Chicago back in 1924. The pair seemed to enjoy the killing, almost as an erotic overture to their relationship. Unlike Rope which only intimates the sexual relationship between the pair, Swoon examines it with more honesty: Loeb, as played by Daniel Schlachet, relishes the power and thrill of killing. Craig Chester’s Leopold, on the other hand, has fallen deeply, obsessively in love with Loeb, and submits to his violent desires as a means of sustaining the relationship. Theirs has an undeniable slave/master dynamic to it; that sense of need on the part of Leopold allows him to waive his morals to please his lover. For Loeb, sex is as much about power as affection. It’s little wonder that the pair killed Franks during a sex game gone wrong.

Swoon isn’t an easy film to swallow–nor should it be. The movie acts as a case study in the psychology of violent relationships, unabashedly putting the eroticism of Leopold & Loeb center stage. Violent, frightening and sexual in the extreme, it’s probably a far better representation of the real Leopold & Loeb than any other film has yet achieved. That makes for an erotic–and horrific–moviegoing experience about what some people will do for love.