Sarah Palin, who’s had the same haircut for 20 years, accuses Obama of being “so still 2008” 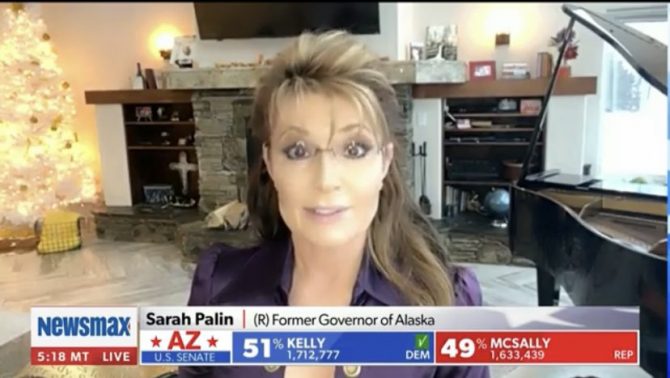 President Barack Obama‘s new book “A Promised Land” has been out for less than 48 hours and it’s already sold roughly 1 million copies, making it the bestselling presidential memoir in modern history.

The only book by a former White House resident to come close to those early sales figures is Michelle Obama’s “Becoming,” which sold 725,000 copies its first day of publication back in 2018.

In “A Promised Land,” Obama briefly mentions Sarah Palin, John McCain’s running mate in the 2008 presidential campaign who later went on to become a contestant on The Masked Singer.

Through Palin, it seemed as if the dark spirits that had long been lurking on the edges of the modern Republican Party—xenophobia, anti-intellectualism, paranoid conspiracy theories, an antipathy toward Black and brown folks—were finding their way to center stage. She had no idea what the hell she was talking about.

Well, it seems Palin didn’t appreciate this very much. She immediately hit the media circuit to do what she does best: lodge thinly-veiled racist attacks against the man she views as responsible for ending her political career while simultaneously proving every single one of his points.

Speaking to Fox News’ Sean Hannity this week, Palin said she is “so fed up” with Obama’s brand of politics.

“Barack Obama with his 700-some-page ‘A Promised Land’ book, I guess, evidently, he thinks that he is the one to lead us to the promised land, so let’s refer to him as ‘Moses’,” she griped.

The person elected to “hopefully get us on a path to get rid of that politics of personal destruction” to whom she is referring, of course, is Donald Trump, which is ironic in many, many ways, the main one being that Trump literally just lost his reelection effort two weeks ago.

In a separate interview with Newsmax, Palin accused Obama of being “so still 2008,” which is also ironic in many, many ways, the main one being that she’s had the same damn haircut and bad dye job for at least 20 years, possibly longer.

Speaking to Hannity, Palin said that, ultimately, she really doesn’t give a damn what Obama has to say about her because he’s of “no value” in her narrow mind.

“In order to let a man’s opinion hurt, you have to give a little bit of value to that man’s opinion,” she said, “so I’m good there, because he does not represent truth.”

Listen to @SarahPalinUSA and @seanhannity prove Obama’s point about Palin leading the anti-intellectualism and conspiracy-theory peddling of the GOP. https://t.co/OfzDyvwsX5