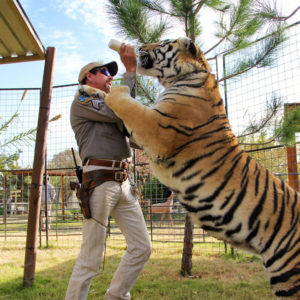 Joe Exotic and Dillon Passage won’t rush to legally divorce. The ‘Tiger King’ star – who is currently serving a 22 year sentence after being convicted of plotting a murder-for-hire against Big Cat Rescue rivalc as well as other charges – has insisted he and his estranged husband are not officially splitting up straight away. In an email sent to his lawyer, Francisco Hernandez, on Friday (26.03.21), Joe said: “Me and Dillon have talked and we are not going to get in a hurry and get a legal divorce. This has been tough on both of us and he is going to do what he thinks he needs to do and I prefe… Read More

Emilio Estevez is still suffering “brain fog” and fatigue, a year after having coronavirus. The 58-year-old actor admitted he had a “very, very challenging” few months after falling ill in March 2020 but he’s thankful he was never sick enough to be hospitalised. He told Empire magazine: “I mean, there’s obviously some… the long-haul effects are real. And there’s been some brain fog and some level of fatigue and getting my lungs back working at 100 per cent. “It was very challenging. The first few months were very, very challenging. But thank God I wasn’t hospitalised. And I’m able to work out … Read More

Jodie Foster thinks she needs to do “something more important” than romantic comedies. The 58-year-old actress admitted she’s often asked why she rarely takes on lighter roles and she admitted that, although she enjoys the movies as a viewer, she prefers to take on movies that give her a “feeling of significance”. She said: “People have said to me, ‘Why don’t you do comedies? You never even did a romantic comedy!’ And I say, ‘I’ve done ‘Maverick’.’ “But there are a number of reasons why I don’t do comedies. “I like them, but they don’t give me the same feeling of significance, and even as an a… Read More

Production of Pablo Larraín‘s movie Spencer has moved to the U.K. from Germany for the film’s final stretch of filming – and the first image of Kristen Stewart (Twilight, Personal Shopper) playing the late Princess Diana has been released. The film focuses on a weekend when Princess Diana spent Christmas with the royal family at Sandringham Estate and when she decided to leave her marriage with Prince Charles. “December 1991: The Prince and Princess of Wales’ marriage has long grown cold. Through rumors of affairs and a divorce abound, peace is ordained for the Christmas festivities at Sandrin… Read More

To the surprise of no one, original co-host Sharon Osbourne will not be returning to “The Talk”

OMG, TikToker shares thrift shop diary they found, gives us a look inside the mind of a 1950s housewife

OMG, Madge once Photoshopped her head on a random woman’s body (and it’s still on Instagram)

Lindsey G’s Got A Gun. Says in a natural disaster ‘my house will be the last ones that the gangs will come to because I can defend myself.’ Twitter is very amused.

Britney Spears is requesting that Jodi Montgomery become her permanent conservator. The ‘Toxic’ hitmaker has been under a conservatorship since her public breakdown in 2008 and for almost two years, the role of conservator – which sees over many aspects of Britney’s life – has been held by Jodi after Britney’s father temporarily relinquished power in 2019 due to health issues. And now, Britney and her legal team have filed new court documents officially requesting that Jodi is made the full-time conservator of her person going forward, meaning her father Jamie Spears would have to retire from … Read More

By Patricia Reaney (Reuters) -George Segal, the Oscar-nominated actor who sparred with Richard Burton in “Who’s Afraid of Virginia Woolf,” romanced Glenda Jackson in “A Touch of Class” and won laughs in the TV sitcom “The Goldbergs,” has died at the age of 87. “The family is devastated to announce that this morning George Segal passed away due to complications from bypass surgery,” his wife Sonia Segal said in a statement on Tuesday. Charming and witty, Segal excelled in dramatic and comedic roles, most recently playing laid-back widower Albert “Pops” Solomon on the comedy series “The Goldberg… Read More