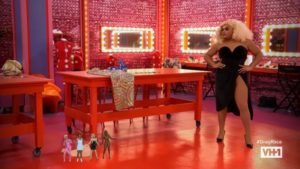 It was only a matter of time before Drag Race tackled the seminal queer cinema classic, Honey, I Shrunk the Kids. It’s a story about an overbearing father pushing traditionally masculine hobbies on a disinterested son, making out with neighbor boys, forming strong emotional bonds to insects and iconic TV actress Marcia Strassman; it’s clearly canon.

Alright, fine. Rick Moranis’ 1989 sci-fi family comedy might not be the obvious choice for a challenge theme, but these late-season acting challenges are rarely worthy of a Mark Twain Prize anyway. It’s another acting challenge, and, despite the queens’ claims otherwise, the script is not “very fun.”

Luckily, the thinned cast and emotional investment built to this point help buoy an otherwise disappointing lap around this Race.

It’s a week with no mini-challenge, which is already a letdown. Ru comes in to announce this week they’ll be starring in the green-screen extravaganza, Henny, I Shrunk the Drag Queens. The plot is simple, if ridiculous: A villainous queen shrinks her competition using toxic overhead lighting, leaving the miniaturized queens to journey across the oversized workroom.

The ladies are left to suss their own parts out, and it’s obviously a trap. Several of the parts sound strangely like some of these girls’ signature performance styles, and the queens fall right for it. Olivia leaps for the sweet, but dumb part. Gottmik claims the ditzy, whiny one. Kandy wants the delusional, brassy diva. Symone makes a bid for Kandy’s role, but last week’s winner is dug in. Instead, Symone settles for the brainy scientist. (Rosé hardly breaks a sweat, because she knows she’ll slay whatever role she gets.)

It’s an emotional episode for Symone overall. After struggling for a few weeks and facing another acting challenge, this season’s beloved frontrunner is feeling the pressure. In a sobbing confessional, Symone gets raw. She explains the added pressure she feels following fellow housemember Gigi Goode’s strong showing last season. It’s a really vulnerable moment, and the emotions feels authentic. We’ve seen so many sides of Symone, but this vulnerability is powerfully endearing.

Part of what makes this final product so puzzling is that the queens are left to source their own wardrobe. Kandy, Olivia and Gottmik play it simple (key against the green screen), but I’m immediately distracted by Rosé’s hot pink latex suit for her butch character and Symone’s tiger print dress for the brainy natural leader. It’s an odd aspect of the challenge that appears to have no impact on judging, but it still detracts from the experience.

The gals shoot with Michelle and Carson, and it’s clear from the outset this is going to be rough. They’re coaching Gottmik and Kandy to go bigger and bigger. Symone’s nerves appear to show through her performance. Olivia will not. stop. asking. questions. No one is a disaster (a la “I was rooting for US”), but there’s not a lot of laughs to be had.

Rosé, of course, overdelivers, but she’s a lot looser than previous challenges. Even the other queens note how Rosé’s attitude has relaxed as she got more comfortable. I tend to agree. Gottmik nails the physical comedy, earning the biggest laughs in rehearsals.

Everyone (rightfully) seems shook ahead of the runway reveal (except Rosé), but it makes for an interesting workroom discussion. The conversation drifts to representation, setting Gottmik up for a really interesting and rare conversation about the gender binary and the trans community. Just when I think I can’t fall in love with Gottmik more, there’s another one of these moments that’s delivered with such candor and ease, and my love only grows. Just a few days after Trans Day of Visibility, it feels especially relevant to champion not just more representation, but more multidimensional and diverse representation. (Speaking of representation, Scarlett Johansson makes a virtual appearance in the workroom, but has less to offer than Hathaway did a few weeks back.)

My second favorite moment in last night’s workroom occurs as Symone is applying her eyebrows and wonders aloud “Are they going to be sisters or are they going to be twins?” and, without missing beat, Kandy chimes in, “They’re going to be neighbors, baby.” Truly, it’s far funnier than anything in the actual video.

This week’s runway is Haute Pocket themed, and it weighs heavily on the judging.

Symone, for starters, absolutely nails the assignment in a chic, wide-legged denim jumpsuit with a large neck piece and pop-art zipper detail giving the effect of one large pocket. To top it off, she chooses a red and yellow wig straight out of the Hayley Williams Signature Wig Collection, and it is fierce as hell. None of her pre-shooting jitters made it to film and the judges, including absolute GODDESS Cynthia Erivo, are impressed with Symone’s subtle choices in her performance. I don’t see it, but it’s hard to argue as they fawn all over her runway.

Olivia looks cute as always in a flirty, stoned dress with oversized pockets on her hips. It’s well-made, but lacks the ambition of the other queens’ outfits. The judges are tired of the same smiley schtick in her characters, and it’s clear Liv may be in trouble.

Rosé gets nothing short of glowing praise for her performance, and it’s all warranted. Even with such a flimsy script, Rosé manages to punch-up the jokes with expert delivery. On the runway, she rocks a super mod, black-and-white dress covered in a pocket print. It’s classic, precise Rosé, but she’s clearly having a lot more fun serving it.

Things take a turn for confident Kandy. Her character is more of the same. It tickles the judges, but it’s wearing thin even for them. The performance is disappointing, but the runway really grinds the panel’s gears. It’s a Japanese-inspired dress comprised of pockets strung together with chartreuse ribbon. She styles it with a dramatic asymmetrical bob wig and bright colored makeup. It’s clear what she’s going for, but it just falls short in the execution. The combo of a weak performance and a sloppy runway doesn’t look good.

Finally, Gottmik’s performance is fine enough, but her runway is a showstopper. There’s a long, dark, sexy Cher wig, and a trenchcoat, which Mik opens like a flasher to reveal watches lining the jacket and a gold bodice just covered in watches and chains. It’s clever and decadent and beautiful and funny, an absolute knockout. I clocked the Hercule s”You want to buy a sundial?” reference immediately, but it was an endearingly nerdy moment that will only earn further endear Mik legions of fans.

Ru asks the girls who should go home, and things get tense. All the girls choose Olivia due to her inexperience, but when it comes Olivia’s turn, she starts stalling and tries to skirt the question. Ru is having none of it, and when she asks again what follows is a prolonged, intense silence. It goes on so long. Long enough to make everyone uncomfortable. Long enough to confuse Gottmik. Long enough to write punch-ups for Henny, I Shrunk the Drag Queens. Eventually, Olivia settles on Kandy, but everyone is so wiped, it doesn’t seem like Kandy will take the news as hard as last time.

The judges award the night to Rosé, with high marks (and safe passage) for Gottmik and Symone heading into the top four. That leaves Kandy and Olivia to fight it out to Cher’s “Strong Enough.” It’s a fun lip sync, but nothing notable, save for Kandy’s jubilant glitter toss into the air.

In the end, the judges still want Kandy, and Olivia is sent back for further seasoning.

Where does that leave our remaining queens? Let’s review our rankings heading into next week’s top four.

How would you rank the queens?