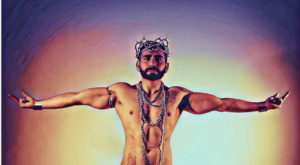 Hop Links, You know, for Easter.

(Reuters) – Apple Inc Chief Executive Officer Tim Cook on Thursday was the latest corporate leader to speak out against the state of Georgia’s new voting restrictions, which many critics say targets Blacks and other racial minorities. “American history is the story of expanding the right to vote to all citizens, and Black people, in particular, have had to march, struggle and even give their lives for more than a century to defend that right,” Cook said in a statement. The Republican-backed Georgia law strengthened identification requirements for absentee ballots, shortened early voting period… Read More

Washington (AFP) – President Joe Biden on Wednesday unveiled a $2 trillion infrastructure plan aimed at modernizing America’s crumbling transport network, creating millions of jobs and delivering a “once-in-a-generation” investment enabling the United States to best China on the global economic stage. The first phase of Biden’s “Build Back Better” program, which he set out in a speech in Pittsburgh, details massive investment spread over eight years. Putting infrastructure at the centerpiece of the president’s economic agenda, it calls for the injection of $620 billion into transport, includin…Read More

Macron orders COVID-19 lockdown across all of France, closes schools

By Sudip Kar-Gupta and Geert De Clercq PARIS (Reuters) -President Emmanuel Macron on Wednesday ordered France into its third national lockdown and said schools would close for three weeks as he sought to push back a third wave of COVID-19 infections that threatens to overwhelm hospitals. With the death toll nearing 100,000, intensive care units in the hardest-hit regions at breaking point and a slower-than-planned vaccine rollout, Macron was forced to abandon his goal of keeping the country open to protect the economy. “We will lose control if we do not move now,” the president said in a telev.. Read More

Analysis-In mutant variants, has the coronavirus shown its best tricks?

By Kate Kelland and Julie Steenhuysen LONDON/CHICAGO (Reuters) – The rapid rise in different parts of the world of deadly, more infectious coronavirus variants that share new mutations is leading scientists to ask a critical question – has the SARS-CoV-2 virus shown its best cards? New variants first detected in such far-flung countries as Brazil, South Africa and Britain cropped up spontaneously within a few months late last year. All three share some of the same mutations in the important spike region of the virus used to enter and infect cells. These include the E484k mutation, nicknamed “E.. Read More

Almost one in seven people who test positive for Covid-19 are still suffering symptoms three months later, according to new figures from the UK. The largest study of its kind on long Covid from Britain’s Office for National Statistics (ONS) found people with coronavirus are significantly more likely than the general population to report ongoing issues, which can include muscle pain and fatigue. Among a sample of more than 20,000 people who tested positive for Covid-19 between April last year and March this year, 13.7 per cent continued to experience symptoms for at least 12 weeks. This was eig… Read More

David Burtka on 17 years with Neil Patrick Harris: “We haven’t lost “it” in the romantic department; We are still madly in love”

With nowhere else to go, Singaporeans cruise to nowhere

More than 120,000 Singaporean residents have gone on so-called cruises to nowhere as part of a government scheme launched late last year, the city-state’s tourism body said on Thursday. “We have completed more than 90 sailings with over 120,000 passengers and no reported cases of Covid-19 spreading on board,” said Annie Chang of the Singapore Tourism Board. Royal Caribbean International, one of two operators running sailings under Singapore’s CruiseSafe scheme, said on Thursday it will extend the local season from June to October, citing “overwhelming demand in Singapore” for the getaways. The… Read More

Maybe not the right folks to bring up right now?

NEW YORK — Ghislaine Maxwell just wants to be treated like men accused of sex crimes awaiting trial. The alleged Jeffrey Epstein madam argued in court papers Thursday that Bill Cosby, Dominique Strauss-Kahn and Harvey Weinstein were all treated better than she has been as they fought sex abuse charges. “The truth is that wealthy men charged with similar or more serious offenses, many of whom have foreign ties, are routinely granted bail so that they can effectively prepare for trial,” Maxwell’s attorney David Oscar Markus wrote in papers filed with the 2nd Circuit Court of Appeals. “Ms. Maxwel… Read More

Dionne Warwick is “having fun” with social media. The 79-year-old singer signed up to Twitter during the coronavirus pandemic and she is really enjoying interacting with so many people using the platform. Speaking about social media, she said: “I’m enjoying the fact that so many are following me. You know, I’m happy and I’m taking the opportunity to be able to talk to youngsters, which is wonderful … They have a lot of fun with me because I’m having fun with it. I love to laugh, you know.” And the ‘That’s What Friends Are For’ hitmaker says social media has also put her onto some amazing young… Read More

Detective Elliot Stabler is back in the Dick Wolf universe, but it’s very different world. “Law & Order: Organized Crime” premieres Thursday on NBC after a crossover with “SVU,” the show that made star Chris Meloni a household name. Meloni’s much anticipated return comes after a year of civil unrest and national outrage over police brutality and high profile cop-related killings. The new spinoff sees Stabler returning to the force after more than a decade following a “devastating personal loss.” From there, he’ll set up a high-level task force to take down the city’s biggest crime syndicates. … Read More

The final season of ‘Supergirl’ will hit home for viewers. Melissa Benoist, who stars as the crimefighter, promises the ending will do the series “justice.” The 32-year-old actress said there is much to look forward to in the CW series’ sixth and final season. “It was a massive decision, but I think as everyone … that’s involved in the show can say with certainty how proud we are, how far we’ve come and what we’ve been able to accomplish in six years,” Benoist told “Entertainment Tonight.” “As bittersweet as it will be to say goodbye, I could not be happier with what we’ve created.” While maki… Read More

A collection of Carl Faberge’s golden eggs is to be displayed at the V&A in London. The design museum’s exhibition on the Russian goldsmith, who died in 1920, will open in London in November. It will reflect on his connections to London, which was home to the only branch of his shops outside Russia. Faberge was famous for creating golden bejewelled egg-shaped ornaments. Three of his Imperial Easter Eggs will go on display for the first time in the UK. Kieran McCarthy and Hanne Faurby, curators of the exhibition, said in a statement: “The story of Carl Faberge, the legendary Russian Imperial go… Read More