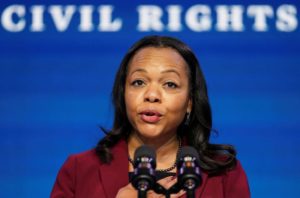 WASHINGTON (Reuters) -Kristen Clarke, President Joe Biden’s nominee to lead the Justice Department’s civil rights division, fended off attacks from Republicans during her confirmation hearing on Wednesday, saying she does not support defunding the police while promising to find common ground with law enforcement.

In a combative hearing, Republicans on the Senate Judiciary Committee took aim at Clarke for everything from articles she wrote and events she attended while she was an undergraduate at Harvard University, to her social media posts and an opinion piece she wrote in June headlined: “I Prosecuted Police Killings. Defund the Police — But Be Strategic.”

“I do not support defunding the police,” she said repeatedly throughout the hearing, noting that editors had written the headline of the June opinion piece.

The intention of the article, she added, was actually to convey the opposite view by advocating for finding better strategies to make it easier for law enforcement to be more effective by “channeling resources to emotional health treatment and other severely under-resourced areas.”

Clarke, a former Justice Department civil rights attorney who recently led the Lawyers’ Committee for Civil Rights Under Law, appeared for her confirmation hearing along with Todd Kim, the administration’s pick for assistant attorney general for the Environment and Natural Resources Division.

Kim is a former Justice Department attorney, a former solicitor general for the District of Columbia and was a onetime contestant on a spinoff of the TV game show “Who Wants to Be a Millionaire?”

If confirmed by the Senate, they will be assuming their posts at a critical time in history.

The nation has seen a rise in hate crimes against Asian Americans during the pandemic, while Republican-led legislatures in some states are advancing bills that critics say would disenfranchise Black voters, and criminal justice reform advocates are urging a wide range of reforms.

Clarke on Wednesday called the increase in attacks on Asian American and Pacific Islanders a “crisis” that warrants attention, and said more should be done to improve data reporting on hate crimes.

Kim received very few questions throughout the hearing, which was largely dominated by questions from both Republicans and Democrats directed towards Clarke, who unlike Kim has faced multiple political attacks from right-leaning groups.

“As I look at your record, I see the record of someone who has spent a career as a partisan,” Republican Senator Ted Cruz said.

“People are trying to say you’re wrong for this job when, dear God, you are what we need in the Civil Rights Division of the Justice Department,” Democratic Senator Cory Booker said.

“If you’re wrong for this job, then Thurgood Marshall was wrong,” Booker continued, referring to the late civil rights attorney and Supreme Court justice. He said Marshall “stood up for the disposed, despised and the hated and the vilified and the overlooked and spent his career trying to fight for those who others ignore.”

Senate Judiciary Committee Chairman Dick Durbin, in his opening remarks on Wednesday, called accusations that Clarke is anti-police “false” and claims by her attackers that she is anti-Semitic based on a speaker she invited to an event at Harvard decades ago “absurd.”

“Ms. Clarke has been a strong defender of human rights,” he said.

“Anti-Semitism is real,” Clarke said. “It’s something that I have fought throughout my career.”