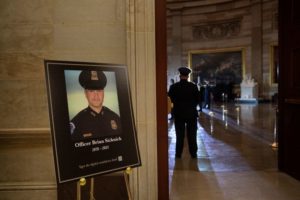 WASHINGTON (Reuters) -Washington, D.C.’s chief medical examiner on Monday ruled that a Capitol Police officer died of natural causes following multiple strokes after the attack on the Capitol, a finding that will make it harder for prosecutors to charge anyone with his murder.

The medical examiner’s office said on Monday that 42-year-old officer Brian Sicknick died of multiple strokes the day after he was sprayed with a chemical outside the U.S. Capitol while it was under siege.

Sicknick was one of hundreds of Capitol Police officers who battled supporters of former President Donald Trump on Jan. 6, when they stormed the building in an attempt to stop Congress from formally certifying President Joe Biden’s election victory.

Sicknick was sprayed by rioters with a chemical substance around 2:20 p.m. on Jan. 6, and collapsed later that evening around 10 p.m. He died the following day at a local hospital.

Two men – George Tanios and Julian Khater – are facing charges they assaulted three police officers, including Sicknick, by spraying them with a chemical irritant.

The findings by the medical examiner mean it will be hard for federal prosecutors to bring homicide charges in connection with Sicknick’s death.

Citing an interview with medical examiner Francisco Diaz, the newspaper said the autopsy found no evidence that Sicknick suffered from any sort of allergic reaction to the chemical spray he was exposed to, nor was there any evidence of internal or external injuries.