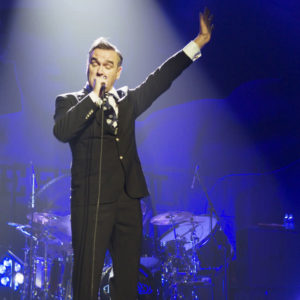 Morrissey’s manager has slammed ‘The Simpsons’ as “hurtful and racist” after the series parodied the musician.

The hit animated comedy series pokes fun at the Smiths frontman in its latest episode, titled ‘Panic on the Streets of Springfield’, in which Lisa Simpson becomes obsessed with the vegan singer of a 1980s indie band called The Snuffs.

In the episode – which takes its name from The Smiths track ‘Panic’ – Lisa’s dreams are shattered when it transpires her idol, who is voiced by Benedict Cumberbatch, has become a bitter, overweight, anti-immigrant meat-eater.

And Morrissey’s manager, Peter Katsis, has now taken to social media to slam the show for its parody of the singer as “insulting” and “hurtful”, as well as calling the writing “harshly hateful”.

In a lengthy Facebook post on the Morrissey Official page, Peter wrote: “Surprising what a “turn for the worst” the writing for The Simpson’s tv show has taken in recent years.

“Poking fun at subjects is one thing. Other shows like SNL still do a great job at finding ways to inspire great satire.

“But when a show stoops so low to use harshly hateful tactics like showing the Morrissey character with his belly hanging out of his shirt (when he has never looked like that at any point in his career) makes you wonder who the real hurtful, racist group is here. (sic)”

Peter went on to highlight the ways in which the cartoon version of Morrissey – who is called Quilloughby – differs from the real-life musician.

He added: “Even worse – calling the Morrissey character out for being a racist, without pointing out any specific instances, offers nothing. It only serves to insult the artist.

“Unlike the character in the Simpson’s “Panic” episode…….

“Morrissey has never made a “cash grab”, hasn’t sued any people for their attacks, has never stopped performing great shows, and is still a serious vegan and strong supporter for animal rights.

“By suggesting all of the above in this episode…the Simpson’s hypocritical approach to their storyline says it all.

“Truly they are the only ones who have stopped creating, and have instead turned unapologetically hurtful and racist. (sic)”

‘The Simpsons’ bosses have said they will not be commenting on the statement, but the episode’s writer Tim Long had previously insisted the character was not solely based on Morrissey.

He said: “I’m sticking by that. The character is definitely Morrissey-esque, with maybe a small dash of Robert Smith from the Cure, Ian Curtis from Joy Division, and a bunch of other people.”