10 Reasons to Celebrate ‘Pose’ Ahead of Tonight’s Premiere [VIDEO] 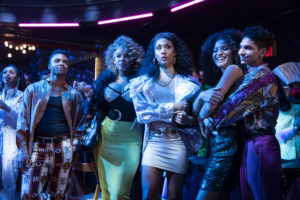 Even among the swell of queer television sweeping screens, Pose stands apart from the rest. The stunning drama chronicling ’80s and ’90s ballroom culture in New York City begins its third and final season tonight on FX. But long before the final credits role, the series has etched an important place in queer culture and the zeitgeist at large.

The idea of a show fully centered on poor, black and brown trans women and gay men living with HIV and AIDS already feels transgressive on its own. Plus, never have so many trans people been featured in so many prominent roles on and off camera. The stars — a flawless cadre including Dominique Jackson, Mj Rodriguez, Indya Moore, Angelica Ross and Hailie Sahar — infuse a radical humanity in their characters. Writers and producers Janet Mock and Our Lady J use their own experiences to keep everything authentic and create a safe environment to explore some heavy material. (Though Mock’s recent comments reveal there’s still a lot of work to do to make entertainment more accessible and equitable for trans women of color.)

Credit is of course also due to series co-creator Steven Canals, who described his passion for this project to us back before the season one premiere, as well as Ryan Murphy, whose resources and sense of scale no doubt helped make many of the series’ most special moments.

In honor of the show’s already sizable impact, we’ve rounded up 10 things we love about Pose ahead of tonight’s premiere.

Set against the bleak backdrop of New York during another pandemic, Pose still doesn’t deny its characters their dreams. Instead, like the kids on Glee, they’re treated to Ryan Murphy’s same sort of slick, sumptuous production numbers. In doing so, the series shows these black trans women living in ways reality denied. The success may be an illusion, but the triumph feels real.

The series’ opening episode featured an iconic run on a museum to mop royal garb from an exhibition. It may not seem like a realistic way to open a show so committed to showing this community’s authentic story, but the scene honored a real truth. That queer creative spirit and inventiveness — especially among the most marginalized members of the community — is a survival skill.

If you think a RuPaul roast can scorch, you ain’t seen nothing until you’ve seen mother Elektra (Dominique Jackson) absolutely devastate someone with a read. The clip above from season two is our favorite example of one of Elektra’s screeds that makes you want to scream, “Stop, stop! She’s already dead!”

Paris Is Burning meets RuPaul’s Drag Race in Pose‘s lavish ball scenes. The community and energy are inspired by the vital role the ballroom scene played, but everything is dialed up to 11 to make sure viewers are left gagging. Voguing from Leiomy Maldonado and runways choreographed by Twiggy Pucci Garçon deliver always-thrilling sequences that make a Drag Race lip sync smackdown look like schoolyard theatrics.

The voguing bears its own praise, but the show also features extensive (and emotional) modern dance performances. As Damon, actor Ryan Jamaal Swain soars in the sweeping dance sequences. Tracy Inman, the show’s modern dance choreographer, is also a director of the Ailey School.

Considering the significant challenges these characters are facing, it’d be easy for Pose to be all drama (and trauma) all the time. Some of the greatest scenes are the little moments they share: intimate family dinners, late-night diner coffee and pillow talk. It may seem small, but consider the scene above, featuring Pray Tell (Billy Porter) and Ricky (Dyllón Burnside), followed one of the rare gay sex scenes between two black men since Noah’s Arc.

While depicting the lives of trans women of color in the ’80s and ’90s, Pose draws from real events. The show has incorporated lots of real history, including ACT UP, the murder of Venus Xtravaganza, the potter’s field at Hart Island and the body found among the belongings of Dorian Corey.

Look, you’re not going to cast Billy Porter and not have him sing, let’s be real. But, don’t sleep on Mj Rodriguez as Blanca. Their duets at the hospital cabarets were series highlights. (Plus, you never know when legends like Patti LuPone or Sandra Bernhard may grab the mic … )

Tens across the board!

The Best Is Yet to Come

The final season kicks off tonight with two episodes starting at 10 p.m. Eastern on FX. Catch up on the first two seasons with our recaps.