Wanda Sykes credits Ellen DeGeneres with helping her come out; Also ‘But, Our Friends Have It’ Won’t Work. Says Her Kids Should Say Obamas Do. 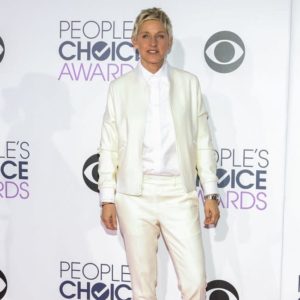 Wanda Sykes has credited Ellen DeGeneres with helping her come out to her parents.

The ‘Upshaws’ actress appeared on the talk show host’s eponymously titled talk show on Tuesday (18.05.21), where she said Ellen’s own coming out story – which saw her publicly reveal she is a lesbian back in 1997 – helped her discuss the topic with her parents.

She said: “You know how you’re just iconic and the whole community appreciates you. You took the blow, man. You were the first one to really be out, out like that and it helped so many of us. It normalised things.

“It just helped with my parents having a hard time to deal with it all. And then their friends coming up to them and saying, ‘We love Ellen and we love when Wanda is on Ellen.’

“It makes a difference, you made a big difference. Always grateful for what you did.”

And after Ellen, 63, thanked Wanda for her kind words, the actress went on to share an update on her 12-year-old twins Olivia and Lucas, whom she has with her wife Alex.

She explained: “You can get them a lot of things. They don’t want any of it. It’s like all the things that they ask for I’m like, ‘No!’ They want phones and we said, ‘No, not until you’re 13.’ Lucas wants Fortnite and we kept saying, ‘No, you’re not playing that game.’

“And now they do the thing of, ‘Oh well our friends have it. Our friends play.’ And I’m trying to tell them that their friends, that doesn’t mean anything to me. If they want to make things happens, the should say things like, ‘When Sasha and Malia [Obama] were 12 they got phones,’ or ‘Sasha and Malia they play Fortnite.’ Then maybe I’d go, ‘Hmm, let me think about this.’ Because I care about that.’ “